Discover the new developments in Birmingham in 2022 and how they’ll impact property over the next year.

How will new developments in Birmingham affect property?

Birmingham is the fastest growing city in England, and with its population set to reach 1,240,000 by 2030, the opportunities for society and businesses are endless. This continuous growth is now being met by many impressive developments across the city, to cater to Birmingham’s expanding population and subsequently, the expanding requirements of being a UK hotspot.

As Birmingham’s skyline rapidly expands with new developments and regeneration, the city is attracting a raft of new business and the professional workforce attracted by the opportunities available. This will drive demand, in turn driving up property prices and rental yields for investors.

Discover some of Birmingham’s new developments completing in 2022, as well as what to expect in the years to come.

Looking to invest in Birmingham? Choose a premium development ready to take advantage of unprecedented growth. 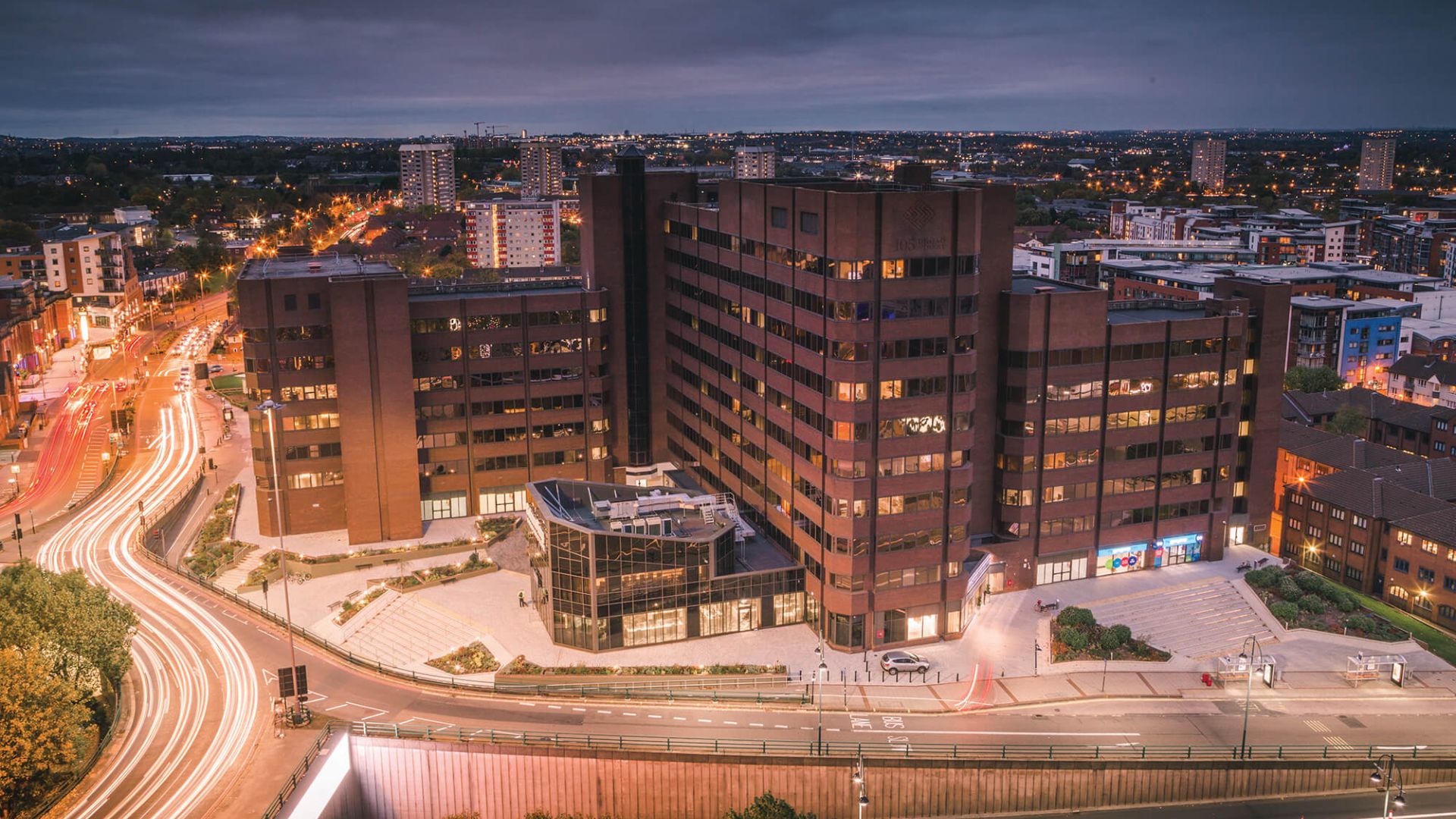 With five universities in and around Birmingham, it comes as no surprise that students make up over 100,000 of the city’s population, 41% of whom stay in Birmingham upon completing their studies. As a result, both students and graduates are a key demographic of tenants.

Not only does Birmingham demonstrate exceptional graduate retention figures, but the city also ranks third in the UK for attracting graduate talent, of whom have no prior links to Birmingham. With the city’s business centre continuously expanding and presenting new opportunities, these graduates are now becoming a new generation of professionals.

The Life Sciences Campus – which will become an integral part of the University of Birmingham – will only entice more students to the city. From the £210 million investment, this health innovation campus is set to provide over 657,000 sq ft of lab, office and incubation space.

As well as accelerating the evolution of new medical treatments, this development is expected to generate an estimated 10,000 jobs and deliver £400 million to the local economy. With a completion date of 2023 for phase one, this new project will simultaneously attract more students to the city, further medical research and encourage inward investment.

Arguably the most highly anticipated development in Birmingham, HS2 phase one is now an estimated, eight years away from completion. The West Midlands is said to be at the heart of the High Speed rail network, and will become the hub of UK transport, connecting major Northern and Southern cities.

Totalling around £1 billion, the Curzon Street Station Investment Plan also includes the regeneration of surrounding areas over the course of 30 years. An estimated 34,000 new homes and 36,000 new jobs will be created, with the onset of HS2 already boosting the economy. So far, the likes of PwC, HSBC and Deutsche Bank have relocated to the second city, strengthening Birmingham’s business centre.

Eventually, the commute from London to Birmingham will be 49 minutes with HS2, opening up more opportunities for the residents of both cities. The growth of Birmingham’s business district, combined with the reasonable commute from the capital, will encourage job searchers to consider the second city. Similarly, this shortened journey will place Birmingham at a commutable distance for those wanting to work in the capital, which in turn, is likely to drive property demand.

As well as introducing a direct link to HS2, Birmingham Airport was set to embark on an extensive redevelopment project in 2021, eventually becoming the ‘Midlands gateway to the world’. The £500 million investment will not only improve accessibility to and from the airport, but with a greater choice of destinations and an increase in flights, this redevelopment will improve connectivity across the world. As of 2022, unfortunately COVID-19 has placed the airport expansion on hold but it’s expected to continue going forward.

With an expected passenger growth of 18 million by 2033, this extension estimates an annual increase of 40% until the projected completion date. Additionally, the contribution to the economy is set to grow considerably, with projections between £1.5 billion and £2.1 billion a year. The wider benefits of this redevelopment, from international trade and inbound tourism, to increased employment opportunities, will be pinnacle to both the Birmingham community and local economy.

A truly unique development for both Birmingham and the property market, St. Martin’s Place combines luxurious living with the benefits of hotel stays. Catering to the demands of busy professionals, St. Martin’s Place boasts an exclusive WiFi lounge, private cinema and gym, as well offering residents an array of hotel services.

Now completed, this ambitious development should be on the radar as an example of how a service-led approach is transforming the residential property market. Conveniently located in the city centre, just minutes away from Birmingham’s evolving business district, St. Martin’s place is ideal for young professionals wanting to take advantage of what Birmingham has to offer.

Described as a ‘once-in-a-generation opportunity’, the Smithfield development aims to transform Digbeth into one of the UK’s hotspots for retail, business and tourism. The investment plan centres on delivering sustainable mixed-use developments and transport links that reconnect the Midlands, and ultimately, boost the economy.

With the £1.9 billion joint venture scheme now finalised, a planning application and public consultation represent the next major milestones. While the projected completion date remains at 2037, Smithfield is expected to provide a plethora of new opportunities for the city – around 100,000 new jobs and billions of pounds worth of investment in infrastructure. In addition to the impressive developments, this regeneration scheme includes the return of River Rea. The Rea Valley Urban Quarter will see River Rea flow through the city centre from Digbeth, with plans for five unique neighbourhoods to surround it. In highlighting the scope of Birmingham, the Smithfield project will continue to showcase the second city.

Amongst Birmingham’s many transport developments is the Midlands Metro Westside Extension, comprising two phases that will improve accessibility to and from the west of Birmingham. Phase one – which connects Centenary Square and Birmingham Westside – completed in 2019, with phase two commencing soon after.

With the Broad Street tram line now essentially complete, the next step in the project is rebuilding the Corporation Street lines, while plans for the next phase to expand the routes to Edgbaston with stops at Brindleyplace, Five Ways and Hagley Road. The overall aim of the project is to support the anticipated growth in Birmingham over the coming years, in both its population and economy.

Birmingham’s most well known mixed-use development, Paradise, is continuing to expand following the reopening of Chamberlain Square and completion of the first phase. Arup – a built environment consultancy – is the latest occupier to sign a pre-let deal that will result in the move of its third largest global office to Birmingham Paradise. This will result in 1,000 new jobs for the city-centre and is expected to happen by 2023.

In the coming years, the site will accommodate an array of amenities, including office spaces, restaurants and a hotel. Upon final completion in 2028, Paradise will be at the core of the city’s business centre, while contributing to Birmingham’s notorious hospitality sector.

Joining Birmingham’s business centre in 2021 is 103 Colmore Row Tower, which has been described as ‘a new landmark’ for the city. The impressive 26 storey office block is set to dominate the Birmingham skyline, with the addition of a 3,000 sq ft roof terrace, a four storey winter garden and multiple restaurants.

Costing £87 million, 103 Colmore Row Tower is expected to complete in October 2021, at which point it’ll become the largest commercial building in Birmingham.

The ongoing expansion of Birmingham’s business district, combined with the increase in transport links between major cities, is likely to drive more professionals and businesses to Birmingham. Further to this, 103 Colmore Row Tower will be the perfect addition for linking Colmore Row, Victoria Square and Snow Hill, and forming a prestigious trio for the city’s professional business sector.

Another mixed-use development, New Square Garden is set to regenerate Edgbaston in the coming years. The £330 million scheme has plans to introduce Grade A office accommodation, 392 build-to-rent apartments and extensive leisure amenities, overlooking a captivating garden square. This elaborate development intends to extend the city core and introduce a new multi-use district to Birmingham.

The Midlands Metro Westside Extension will complement New Square Garden, with the Edgbaston Village Metro terminus being directly opposite the development, further increasing accessibility to and from the city. It’s expected that New Garden Square will complete in 2023, although there has been no official date set.