Why Invest in Property in Derby?

The East Midlands is on the rise and with it, property in Derby. As one of the most affordable places in the UK to buy, property in Derby is fast becoming a sought after asset for investors seeking exceptional growth and the employment opportunities that attract tenants. Want to know the best areas for Buy-to-Let investment in the UK? Here’s why you should invest in property in Derby today.

Despite its high level of performance, the East Midlands is still a relatively uncommon investment destination and you may be asking: why invest in property in Derby?

Well, aside from being one of the most affordable areas to buy property in the country, Derby is delivering exceptional rental yields and forecasting high price increases going forward.

The remarkable growth of the city so far has been reflected in the performance of property, with a 172% increase in prices over the past 20 years.

Despite this level of growth, demand still outweighs supply. With just 17,800 Derby properties in the rental market, there’s an increasing disparity that could result in much higher price increases going forward.

When we take into account this supply and demand imbalance, plus the flurry of regeneration impacting the skyline, Savills predict that Derby (along with many other locales in the East Midlands) could see prices rise by 24% by 2025, highlighting the potential for investors to seize the opportunity to invest early.

Discover why Derby property investment is on the rise with our Derby Property Investment Guide, as this East Midlands city develops as a new investment hotspot in 2021.

Why Invest in Derby? – What makes this East Midlands city a top destination for property investment?
Derby Market Performance – How are property prices and rental yields highlighting growth in Derby? 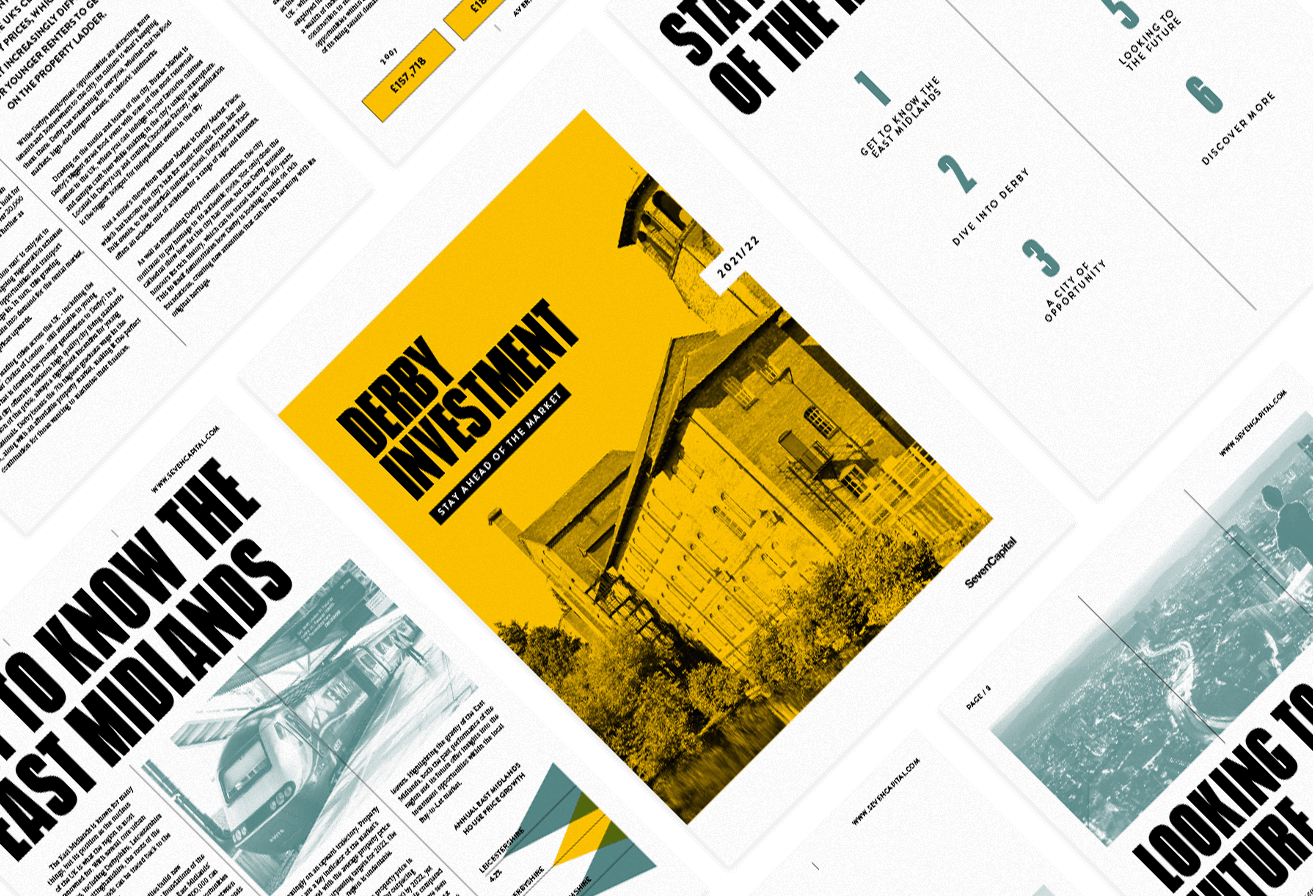 Derby is a hub of opportunity, characterised by an ambitious manufacturing presence that can be traced back to the Industrial era.

While the city continues to pay homage to its past, the future of Derby is brimming with creativity and vibrancy. With Derby fast becoming the cultural core of the East Midlands, the regeneration the city is experiencing is driving the price of property in Derby.

At the heart of Derby’s golden future is its employment opportunities, broadening the city’s horizons and attracting a diverse workforce of young professionals. By forging new avenues, Derby is creating a domino effect across the city, with the potential to create a professional hub that reflects its geographical location – the epicentre of the UK.

As you’d imagine, the opportunities and attractions of this leading city’s future landscape will attract a wealth of new visitors – driving the demand for this emerging hotspot.

The East Midlands is the nucleus of the UK, helping bridge the gap between the North and the South. As a core city within the region, Derby is well placed to use its roots at the heart of the UK to drive connectivity to key cities across the country.

With a rail catchment of over 800,000 and 17 universities within an hour of travel, this connectivity is an integral part of Derby’s appeal to investors. Not only does this entice a wealth of inward commuters to the city, but the city’s connectivity strengthens the opportunities for transient tenants.

The highly anticipated High Speed 2 rail line will put many new pockets of the UK on the map, while continuing to forge the profiles of established towns and cities. For property in Derby, this ambitious railway will mean residents will have a commute to London that takes just 52 minutes, making the capital accessible for both work and play.

Branching out as far as Leeds and York, HS2 will put the East Midlands within 35 minutes of major Northern areas, as well as bringing neighbouring cities – such as Birmingham – within a short 20 minute journey. Paired with the East Midlands airport, HS2 will help redefine standards of travel for Derby, elevating expectations whilst creating new levels of accessibility.

One of the major pulls of Derby lies in its employment opportunities. The manufacturing industry underpins the city’s strong employment base, with thriving businesses on every corner.

Home to the retail, textiles and professional services, Derby is perfect for those who are searching for an industrious atmosphere. With an established economy built on ambitious skills, Derby has made a name for itself as the sixth most productive city in the UK.

The expertise of Derby’s manufacturing sector spread far and wide, with the city being a leading UK hub for the aerospace, rail and automotive industries. Housing the likes of Rolls Royce, Toyota and Bombardier Transportation, these global companies contribute over 45,000 jobs in total to Derby’s economy.

On top of its position as a manufacturing hub, Derby also has an established hi-tech sector and thriving creative industries. While 12% of the city’s workforce is employed in hi-tech functions, the creative and digital industries deliver 12,500 jobs to the local economy. In highlighting the versatility of Derby’s economy, it’s no surprise that investors are continuing to look to this ambitious city.