Back to School in the East Midlands

Derby is a young and thriving city, with almost half of its population being under 35. Mostly made up of students and young professionals, this demographic is the generation of tomorrow and the future of Derby.

The city is renowned for its historical roots and award-winning university, but with a student population of over 30,000, why exactly is Derby so popular amongst students and young professionals?

What’s in and Around Derby?

Derby’s student population spreads far and wide, with the renowned Repton School significantly boosting the city’s younger demographic. Repton School, based on the outskirts of the city centre, was established in 1557 and has since become a household name across the globe.

The School prides itself on offering an education steeped in heritage but in a 21st century context, drawing over 1,000 pupils aged from 13 to 18 to Derby. Repton School is not only one of the most esteemed schools within the UK, but its results for both GCSEs and A Levels reinforce its excellence, with over 70% of GCSE students receiving A* grades across the board.

Derby is also renowned for its impressive transport links, many of which have continued to entice prospective students and young professionals to the city. With 17 universities within an hour of the Derby, residents have the luxury of choice and the city welcomes students from neighbouring areas across the East Midlands.

But which universities can students choose from?

The University of Derby is at the heart of the city and has been a key area of investment in recent years. As a top 30 university within the UK, the city has injected £200 million into rejuvenating its facilities over the past 10 years, which has continued to raise the profile of the University of Derby.

With around 30,000 students, the university contributes an impressive £50 million to the regional and wider economy each year, as well as delivering thousands of young professionals into a variety of industries upon graduation.

Stemming from ambitious facilities and esteemed teaching practices, the University of Derby has seen 76% of students secure graduate level roles upon leaving the university. Similarly, 96% of these graduates are employed or in further education, highlighting the successful pathways University of Derby students typically embark on.

Not only does the university equip their students with the skills and knowledge for the workplace, but with deep connections to local communities and businesses, it’s no surprise that the University of Derby is often a top contender for prospective students.

Just 20 minutes south of Derby is one of the UK’s leading universities – Loughborough University. Ranked as a top 10 university in almost all league tables across the country, those living within Derby have easy access to the university thanks to the city’s exceptional transport links.

Along with the University of Derby, Loughborough University is an asset to the East Midlands, and plays a key part in attracting more and more students to the county, many of whom stay in the area upon graduating.

The University of Nottingham – yet another top university within the UK – is a short 23 minute commute from Derby and has strong connections with the city. In recent years, the University of Nottingham has opened a campus in the Derby City General Hospital, further showcasing Derby to the wider East Midlands and enticing more students to the city, while highlighting the city’s roots in medical history.

With around 35,000 students at the University of Nottingham alone alongside campuses across China and Malaysia, the East Midlands provides both impressive transport links and first-class academic offerings. 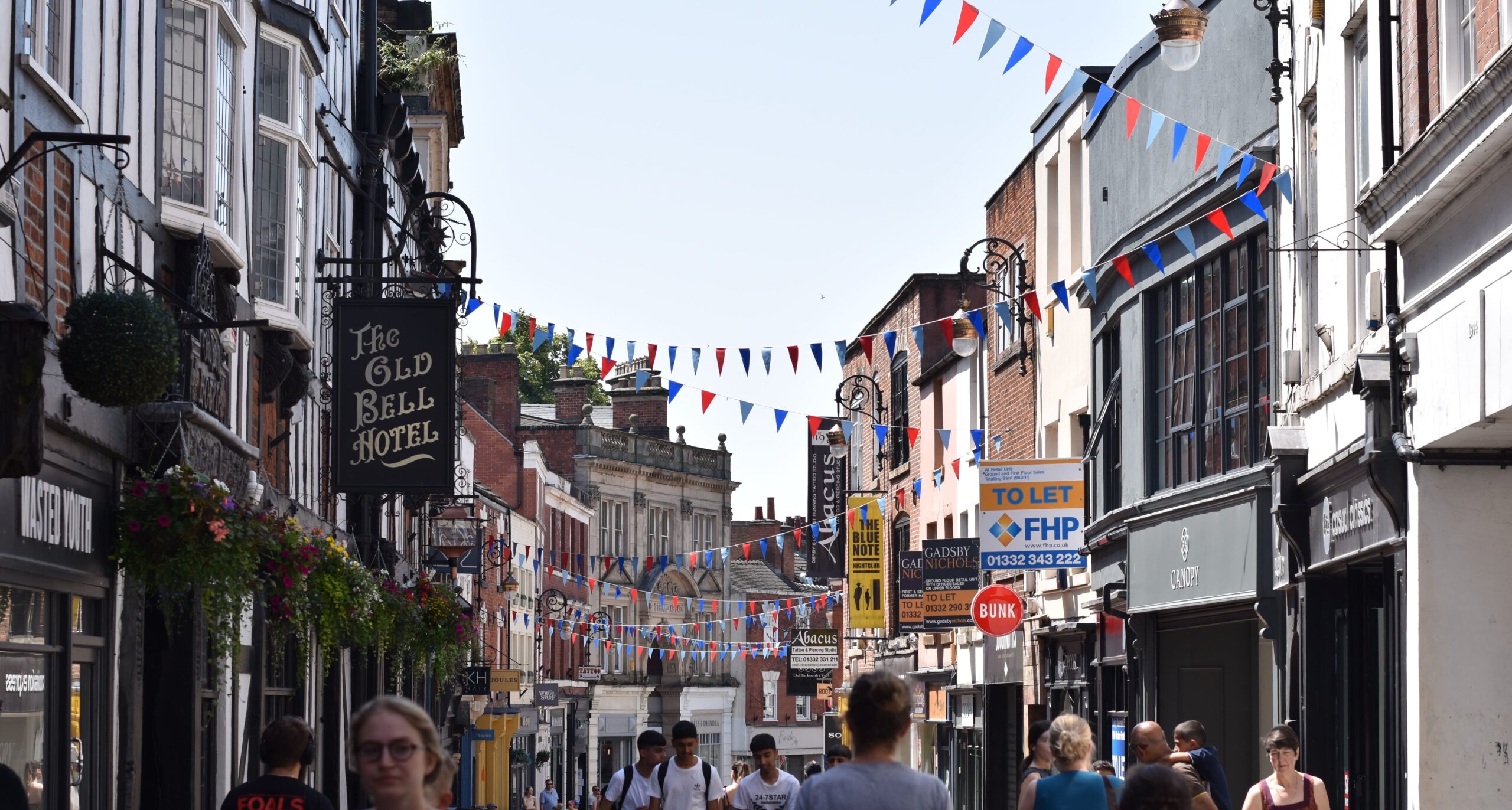 A City for Graduates

As well as enticing prospective students to the city with impressive academic links, Derby is also a key city amongst graduates. Graduates are the young professionals of tomorrow and with many students choosing to stay in Derby for work, this is increasing the city’s economic output by driving more employees and employers to Derby.

But why are graduates drawn to Derby?

There are a wealth of reasons why Derby is a top choice for graduates, from its thriving social scene and affordability, to its employment opportunities. Derby is small but mighty, and offers graduates competitive salaries across a variety of different industries. While the average UK graduate salary currently sits at £23,100, those working in Derby can expect £24,100, on average.

The higher wages across Derby can be attributed to its economic output, with it being the 6th most productive city in the UK. Not only does this highlight the opportunities within the Derby, but when considering the affordability of property across the city, it’s popularity amongst both students and graduates is no surprise.

Graduates – typically aged between 22-24-years-old – are considered to be ‘Generation Rent’, with the high wages and low living costs making Derby an ideal hotspot for this demographic. This affordability is also reflected in purchase prices, making for an affordable Buy-to-Let investment with high returns.

Employment opportunities across Derby have been on an upward trajectory for many years, driven by the international brands located within the city. Rolls Royce, one of the biggest aerospace manufacturers across the globe, invested £90 million into Derby for its aerospace headquarters, bringing with it a wealth of jobs and graduate schemes.

The 12-24 month graduate development programme offers graduates an insight into life at Rolls Royce and equips employees with the experience to lead the company into the future. Alongside an ‘iAccelerator’ programme centred on data, technology and AI, these entry level opportunities are at the centre of Derby’s appeal amongst the younger demographic, many of which are exclusive to the city.

With the connectivity of the East Midlands, Derby houses a significant cluster of transportation companies. Bombarder is the UK’s leading rail engineering and manufacturing company, with its abilities to design, develop, manufacture and test trains for the UK and export markets making it a truly unique business. As a global leader in the rail industry, Bombardier offers ambitious internships and entry level jobs to further develop this sector in the years to come.

While Derby’s manufacturing industry employs over 45,000 people, the city has an established digital sector and thousands of employees in professional services. The ambition of Derby is admirable, and with over 4,500 jobs created in the past three years alone, there’s a clear indication of the city’s potential.

Students and graduates are the professionals of tomorrow, and Derby’s academic base continues to draw the younger demographic to the city while its employment opportunities encourage them to stay. This continuous cycle of fresh graduates and new students means that the demand for rental property will always remain, giving Derby an average rental yield of 4.20% and making it a Buy-to-Let hotspot for investors.

Want to Know More About the East Midlands?

Sophie Oldman is the Digital Content Executive within the Content Team, specialising in research-led written pieces across a variety of sectors within the property industry. With a PR background, Sophie is a savvy content marketer focused on creating and distributing cutting-edge content for SevenCapital’s industry leading blog.