The Derby Masterplan at a Glance

Derby is renowned for many things, from its industrial roots to housing the likes of Rolls Royce and Bombardier, but in more recent years, the city’s ambitious regeneration schemes have been the main topic of conversation.

With a growing population increasingly made up of young professionals, the city’s potential  is expanding. Not only is the demand for property increasing, but the need for more amenities and additional mixed-use  spaces has catalysed a myriad of regeneration projects, the culmination of which is the Derby City Centre Masterplan 2030.

What is the Derby City Centre Masterplan 2030?

The Derby City Centre Masterplan 2030 is set to propel the city into a vibrant future, with multiple projects on the horizon creating exciting new spaces. First introduced in 2015, the scheme was part of the £3 billion investment that Derby saw over the last decade and now represents a roadmap for further investment going forward.

The project has four key ambitions – to establish a strong identity for Derby, provide a wealth of retail and leisure experiences, offer residents a thriving cultural landscape and expand  the central business district.

Achieving these goals will not only raise the profile of Derby, but it will also benefit the local economy. By expanding the city centre with new spaces and districts, this master plan aims to generate around 4,000 new jobs alongside 1,900 new homes and £3.5billion worth of leveraged investments.

What Regeneration Has Derby Already Seen?

While Derby’s regeneration schemes started just 10 years ago, the city has already changed beyond measure. Totalling over £3 billion, the regeneration projects over the last decade have seen Derby welcome everything from new leisure outlets, to an entire cultural quarter.

The addition of the Derbion (formerly known as Intu Derby) shopping centre was a pinnacle point for both Derby and its residents, introducing not only a wealth of new high street names to the city, but propelling the economy by attracting new and existing customers.

To complement the city’s new and improved retail offering, part of this investment was dedicated to founding the Cathedral Quarter. This unique area of Derby was introduced to pay homage to the city’s rich heritage and to continue expanding its amenities. Offering independent shops, cultural venues, restaurants and historic landmarks, this quarter remains a popular destination within Derby.

With a plethora of new amenities and attractions drawing more residents to the city, the Castleward Urban Village formed – and continues to form – an integral part of Derby’s regeneration. Having already delivered many new homes across the city in phase one of the project, the Derby City Centre Masterplan 2030 will continue to build upon this further.

As well as bringing new attractions to the city, such as the Derby Arena, the past decade has seen the revitalisation of several heritage buildings. The Silk Mill in Derby was the first factory to come to the UK, and has since been transformed into the Museum of Making to savour the city’s rich heritage through unique showcases and exhibitions.

Want to know more about Derby?

Packed with everything you need to know about the East Midlands, the performance of the Derby property market and its exciting future, the Derby Investment Guide is essential for those looking for their next Buy-to-Let hotspot.

What is Yet to Come in the Derby City Centre Masterplan 2030?

Spanning the next nine years, the Derby City Centre Masterplan will continue to revolutionise the city’s landscape. In order to make Derby a well-connected and thriving hub within the East Midlands, there are still a number of projects either underway, or on the horizon.

Derby’s Market Place was constructed in 1866 and naturally plays a key part in the city’s history. Centred in the award-winning Cathedral Quarter, the reinvention of Market Place will see the addition of traditional and themed markets, events and small performances throughout the year.

The completion of this project will also work towards connecting the Derbion shopping centre and St. Peter’s Quarter to Becketwell and the Cathedral Quarter, making for a cohesive and interlinked city centre. When combined with the remainder of Derby’s regeneration schemes, this new and improved venue will attract a greater number of businesses and visitors to the city.

The Becketwell regeneration scheme spreads far and wide, spanning several leisure, retail and residential projects. The regeneration of Becketwell Performance Venue is the second phase of this scheme but is arguably the most significant, and will benefit Derby in both the short- and long-term.

Upon completion, this venue will host an array of events, from comedy acts, to theatre productions and commercial events. As well as providing an additional attraction for the city, the Becketwell Performance Venue will generate 200 new local jobs and draw an additional 250,000 estimated visitors to Derby each year.

To build upon the city’s expanding business district, the Derby City Centre Masterplan 2030 includes the regeneration of the Assembly Rooms. This project will bring a large-scale entertainment and conference venue to the city centre, complementing Derby’s growing leisure and retail facilities. 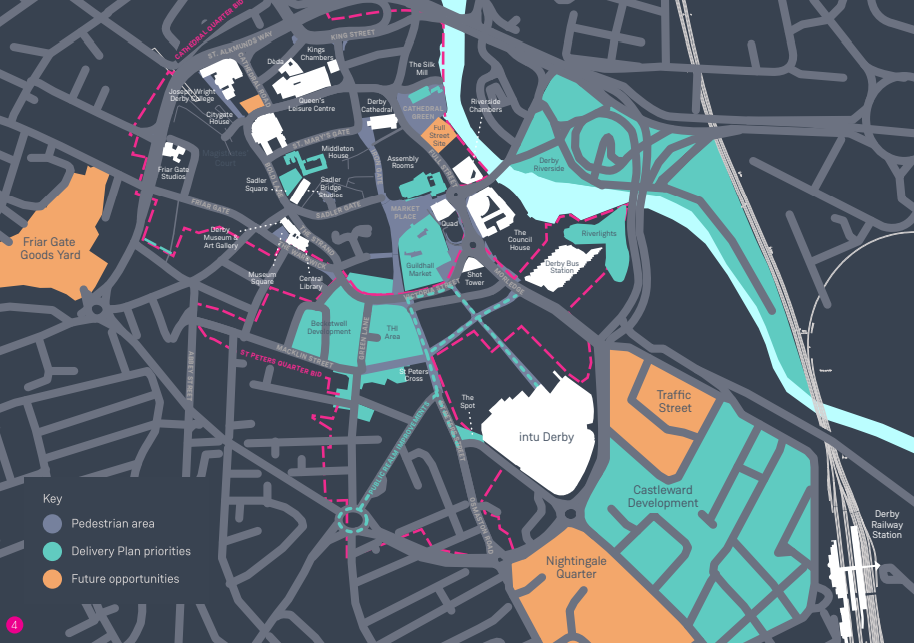 With the regeneration of Derby delivering new employment opportunities and amenities, the city’s population is expected to soar. As a result, the demand for property will continue to rise and outpace the city’s supply.

The Castleward Urban Village aims to address the undersupply of property in Derby by delivering an extensive housing development. On a 12 hectare site, this new village will deliver around 512 new homes next to the renowned Nightingale Quarter development.

Located on the former Derbyshire Royal Infirmary site, Nightingale Quarter is an up and coming residential development in the heart of the city. Working alongside Derby’s existing regeneration schemes, this ambitious project will enrich the city centre with contemporary living solutions to meet the growing demand for property.

Totalling £150 million, Nightingale Quarter covers 18.5 acres and has been split into two distinct phases – one for houses and one for apartments. While phase one delivered 125 two- and three-bedroom houses, the second phase will introduce 675 new apartments to the site along with exclusive amenities, such as a café, gym and meeting rooms.

As well as housing many manufacturing giants, Derby is also home to many emerging businesses. To support the growth of these companies, the city’s masterplan will also deliver large office units to allow these businesses to reach their full potential.

Not only will this provide existing Derby businesses with more opportunities to flourish, the increased availability of commercial spaces will also draw more employers to Derby. In turn, this will offer residents more employment opportunities whilst boosting the local economy.

What Does This Mean for Property Investors?

When it comes to Buy-to-Let property, location is key. While bigger cities, such as Birmingham and London usually offer competitive rental yields, the higher property prices can make emerging locations more profitable in both the short- and the long-term.

This makes Derby a prime investment hotspot, with the city in the midst of its biggest transformation to date. Not only will the developments that emerge from these regeneration schemes cause an influx of new jobs and opportunities, but it should also encourage further investment into the city.

As a result of ongoing investment and increasing employment opportunities, the demand for property will naturally increase, and with Derby’s limited supply of property, rental yields are expected to reflect this in the coming years. Not only could investors see promising returns on a monthly basis, but Derby’s regeneration schemes allow for more capital growth on a long-term basis.

Sophie Oldman is the Digital Content Executive within the Content Team, specialising in research-led written pieces across a variety of sectors within the property industry. With a PR background, Sophie is a savvy content marketer focused on creating and distributing cutting-edge content for SevenCapital’s industry leading blog.