Over the years, saving money has become more of an expectation than a luxury, with the rising cost of living and an increasingly competitive employment market making it a necessity for the majority of society.

That said, the discrepancies between demographics, as well as the number of Brits without any savings at all, suggests otherwise.

What is the Average Amount of Savings?

According to research, one in 10 Brits – equating to around 9% of the UK population – have no savings at all, and a third of this demographic have less than £600 set aside for emergencies. With this in mind, it is no surprise that 41% of Brits don’t have enough savings to live for a month without income.

While a considerable number of UK residents don’t have a substantial savings pot to draw upon, during 2020, the average person had £6,757 saved. These disparities could potentially be attributed to the national lockdowns and stringent guidelines that were in place last year, which saw a rise in ‘accidental savers’.

But what generation typically has the biggest savers?

With bigger pay packets usually coming more with age, some disparities between age and savings are to be expected. While baby boomers and those in the silent generation, on average, have savings between £9,490-£9,758, the jump to generation Z shows a considerable difference in funds.

Compared to both the baby boomer and silent generations, the average savings pot amongst generation Z, which stands at around £2,530, not only highlights the discrepancies between ages but also indicates an association between salary and savings. And with 53% of 22-29 year olds having no savings at all, this is reinforced further. 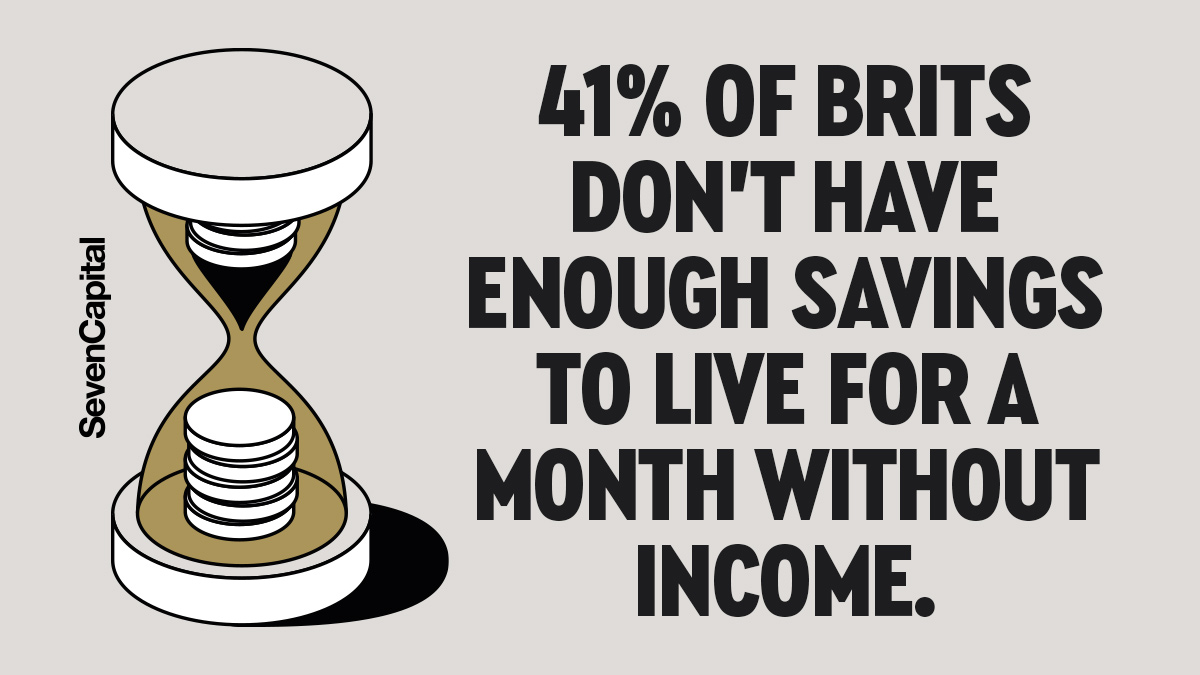 How Can You Maximise Your Savings?

Whether you’re saving for a specific goal, or are just looking to build up a rainy day fund, strengthening a savings pot will always come with advantages. From different saving techniques to having a separate account solely for reserves, there are many avenues to maximising your finances.

Regardless of whether you use it, you will have likely heard about the 50/30/20 percent savings rule. This technique has become increasingly common over the years, with it being a universal rule based on your monthly salary (after tax).

Essential payments and commitments, such as rent and bills, are typically your biggest monthly expenses, which would come out of the 50% chunk of this savings rule. 30% of your monthly salary would be for any ‘wants’ you may have, whereas the remaining 20% of this amount would be kept as savings.

With a clear structure and manageable amounts to spend, save and pay bills with, this savings rule is often popular amongst those looking to gradually build a savings pot. The flexibility of this budget also allows you to adjust it where necessary, especially when you receive pay rises and your standard of living increases.

What Can Affect Average Savings?

There are a wealth of different factors that can affect the average savings pot, such as cultural trends, location and of course, salary. Over the years, certain cultural attributes have been linked to savings rates, with the level of collectivism within a society having a notable impact.

Collectivism cultures are considered to be those that promote selflessness and community cohesion, which subsequently, has been closely linked to higher savings rates. Portugal and Mexico are both examples of collectivism cultures, with average savings rates of around 15%. In comparison to the UK’s average of around 9% up until 2020, the impact of this cultural presence is notable.

Across the UK in particular, location heavily influences the average savings pot. While this is inevitably impacted by the average salaries in different areas, the East Midlands is home to lowest savers, with an average of £6,438 per person. Following closely behind is Northern Ireland, where the average savings pot stands slightly higher at £6,710, although living costs here are considerably more affordable than the UK.

London is notoriously expensive, which subsequently, is reflected in both the average salary and saving rates. The average savings pot across London is almost reaching £30,000, reinforcing the extent to which location can affect savings rates.

When Should You Start Saving?

There are many different variables that could impact your savings accounts, so the general rule of thumb is that you should start saving sooner rather than later. Ideally, you should consider contributing to a savings pot when you start working, but if you already have other financial responsibilities, gradually building up a ‘rainy day’ fund is often a good idea.

Although you may not have any long-term goals in mind when you first start your savings pot, working towards smaller, short-term objectives usually gives a solid base to build upon later down the line. Once you start saving and begin hitting these smaller milestones, you’ll likely get a better idea of how much you can afford to save on a monthly basis, which will inform your long-term savings goals.

Should You Invest or Save?

Whether you find yourself saving or investing, there are always a wealth of considerations along the way. Not only are there various different savings accounts to think about, but interest rates are also a big focus for savers.

Similar to the disparities in saving habits, age plays a significant role in investment trends. While generation Z have the least savings, 75% of these have invested their money instead, along with 74% of millennials and 69% of generation X. With a seemingly ‘either or’ approach, it’s no surprise that baby boomers and the silent generation – the biggest savers – make up the smallest proportion of investors.

With over half (55%) of these investors claiming that poor interest rates on savings accounts are a motivator behind their financial choices, both short- and long-term goals are seemingly key factors when considering money matters.

Compounding is often an additional incentive for investors, with the process of reinvesting any capital gains allowing for a potentially lucrative investment portfolio. The subsequent growth of compounding stems from the earnings generated from its initial principle, as well as the earnings from preceding periods.

Differing from linear growth, the notion of compounding increases the opportunity for faster capital gains, which often makes both short- and long-term goals more accessible for investors.