Home Property News Why Invest in University Cities and Towns?
Back to Articles

A question we’re often asked is: why invest in university towns and cities?

The education sector has always been an excellent signpost for investors seeking above-average tenant demand for a Buy-to-Let investment.

Within the sector there’s two main groups to consider – students and graduates. Students are fairly self-explanatory in that they mainly contribute to the rental market in the area. Graduates, on the other hand, can have a much wider impact in the long-term.

Graduates from top universities will typically want to stay in the area (or at least nearby) if there are good career opportunities on hand. As you’d imagine, many businesses have identified this demand and share the same spaces as these top educational centres.

Fortunately for investors, because these areas are used to accommodating large numbers of students, the amenities on hand are also beneficial for graduates, helping maintain the lifestyle they’re looking for.

These graduates are important because they inevitably become the young professionals that rent – making up a huge percentage of the current UK tenant demographic.

This means for investors, university towns and cities represent an opportunity to tap into both the student and professional rental market, depending on the chosen strategy.

The fact is, universities drive demand and the UK is home to some of the best in the world.

Which towns and cities have the highest graduate demand?

One of the top ways to measure graduate demand is using the ‘Salary/Rent Value Index’ (SRI). This takes into account the average monthly salary that graduates can expect and measures this against the average rent, which eventually builds out the final SRI.

When we measure this against the top UK cities for graduate retention, technology innovation and ‘startup economy’, the results are interesting. The top three UK cities in the SRI are Birmingham (2.03), Slough (1.91) and Reading (1.85), closely followed by Leeds, Bracknell and Newcastle-upon-Tyne.

These areas are typically providing a mix of quality career opportunities and affordability that makes them ideal for graduates.

Slough in particular stands out, mainly because of the excellent average salary it can deliver for its graduates. At the same time, its rental prices are relatively affordable when compared to other destinations in the South East, which obviously helps working professionals just starting out.

It should be noted that these SRI positions also generally make the surrounding area more desirable. It’s common for graduates to ‘ripple out’ from the city-centre alongside rent values and salaries.

This is because graduates often seek more affordable areas within commuting distance of larger cities, creating more competition in the local markets and directly impacting rental values and inward investment – both key metrics for investor success.

Where in the UK has the best graduate retention?

So we’ve highlighted the impact graduate retention can have on the market but where are the highest performers?

In terms of graduate retention, the South East has the highest number outside of London – nearly 45% of the population in the region was classified as a graduate in the last annual population survey. 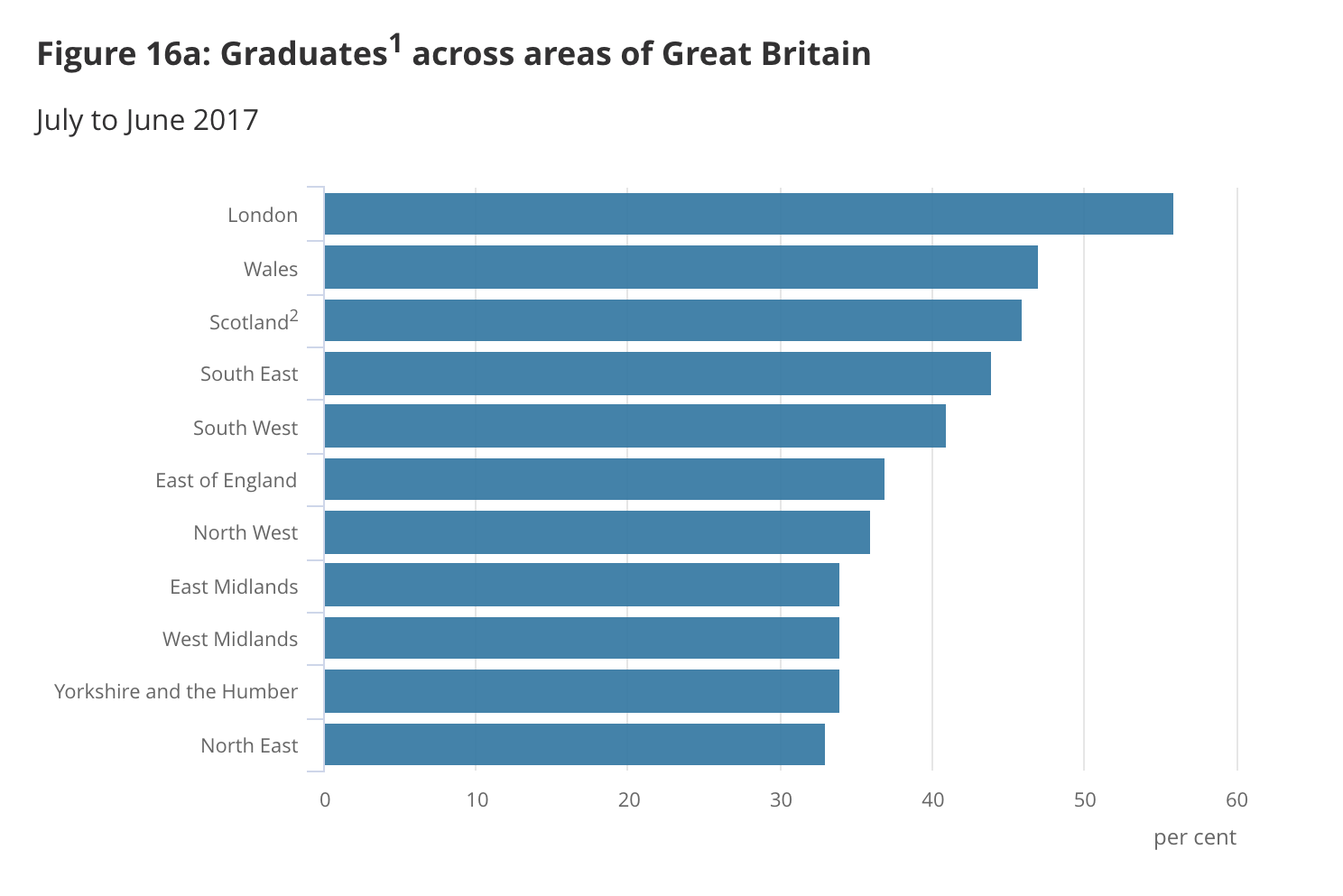 Aside from hosting some of the top educational centres in the country, it’s also the home of the ‘UK Silicon Valley’, the technological hub responsible for creating a vast array of job opportunities for graduates.

With top names such as Oracle, Microsoft and Dell – as well as an excellent economic forecast and an above-average standard of living – it’s no surprise that the South East maintains such a good graduate retention rate.

As you’d expect, an investment in the South East would be well placed to take advantage of rising to deliver consistent returns and this means that several emerging markets we’ve identified are at the heart of the Thames Valley.

How do universities affect property prices?

Aside from driving tenant demand, what other effects does a university have on property market prices?

There’s solid evidence that educational centres play a huge role in raising the profile and thus the prices of an area. In the past three years that a typical degree would take to complete, prices in around 65 university towns have risen by an average of 23%.

The biggest rises occurred in areas such as Guildford (University of Surrey) and Uxbridge (Brunel University), where prices jumped by £105,000 – which translates to 26% growth – over the last three years.

Bedfordshire also saw an exceptional rate of growth, with property prices rising by 42% over the same time period.

While other factors, such as regeneration and inward investment, can have a huge effect on property prices, there’s no doubt that universities also contribute to further growth by fostering an entrepreneurial atmosphere.

If we use Birmingham as an example, the sheer amount of graduates that reside in the city after their course ends has contributed to an incredible ‘incubator environment’ for new business.

This has resulted in Birmingham now being the highest ranked regional location for startups in the country, with over 19,000 new businesses recorded each year since 2018.

Discover BTL Performance in the UK

Want to learn more about Buy-to-Let in the UK? Download the 2020 BTL Guide today and discover everything you need to know about this prime asset.

If we consider that in 2018 – 2019 there were over two million students studying in the UK – made up of both domestic and international university attendees – it’s no wonder that Buy-to-Let (BTL) can be so effective in certain locations.

While purpose-built student accommodation is becoming increasingly common in the student BTL market, traditional rentals are still able to perform given the right location according to BuyAssociation.

As with the ‘standard’ market, the highest returns in university towns and cities seem to currently sit with the Midlands and the North.

The University of Leicester currently holds the highest returns at 6.56%, closely followed by properties near Aston University in Birmingham which offer 6.5%.

Moving further north, Liverpool properties have a 6.1% return while Manchester can offer slightly lower at 5.2% on average.

London, on the other hand, struggles to find high yields in such an expensive market. Properties near some of the top universities including Imperial College, King’s College and London School of Economics only received between 1.7% and 2.3% on average.

How has coronavirus affected universities?

One of the major impacts of the pandemic has been on the educational sector. With courses moving online and certain universities delaying entry for new students, it’s an uncertain time for landlords focused on student BTL.

That said, Russell Group universities are still expected to end up taking more than they anticipated – following the u-turn on exam results and the removal of the admission cap for many of these institutions.

Similarly, experts believe that if landlords can work through this challenging year, 2021 could see an unprecedented surge of students.

Accommodation for Students, a lettings site specifically for students, believes that next year could see a rush of both new attendees and those that deferred their 2020 place fighting for the best accommodation – good news for landlords in the sector.

For Howsy CEO Calum Brannan this time represents an opportunity: “With many of the top universities not only attracting the best students but also providing rental yields way above the UK average, a university buy-to-let could be the key to a profitable investment in what are otherwise tough times for landlords at present.”