While the 2020 UK market is set to benefit from a clearer decision on Brexit and a majority Government in power, Birmingham is predicted to continue the meteoric rise it’s seen since 2016. With property prices increasing by 16% over the last three years – the highest in the UK – and a predicted rise of 15% by 2023, the future looks bright for the second city.

Demand for Birmingham has grown exponentially over the last few years and looks set to continue in 2020 as the Big City Plan provides new amenities, mixed-use spaces and exciting new landmarks. With 40% of the city’s core inhabitants under-25, Birmingham maintains the 4th highest graduate retention rate – 41% year-on-year of over 100,000 full-time students.

Birmingham has also seen demand bolstered by people moving from overseas and London. The second city is the most popular location for Londoners leaving the capital according to the Office for National Statistics and four major universities in the city attracts a range of international students from across the globe.

This has created an undersupply of property and an incredible increase in rental potential within the city – JLL predict that rental prices will increase by 12.5% over the next three years, demonstrating the long-term staying power that Birmingham is building. 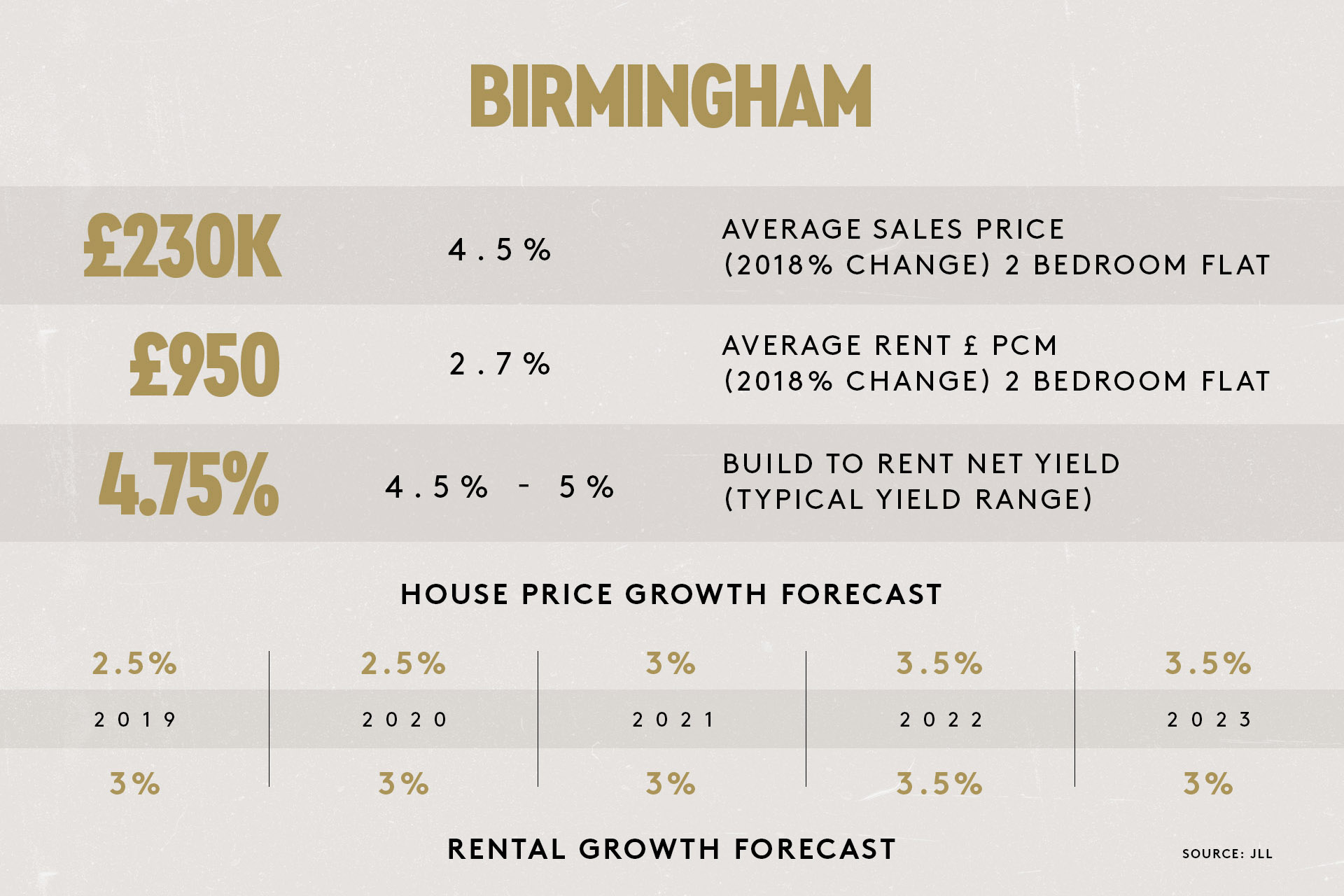 While you may expect this level of demand would be difficult to maintain, Birmingham’s population is still predicted to jump up to 1.3 million over the next 20 years. At this rate, 89,000 new homes would be needed between 2011 and 2031 – the wider plan for Birmingham development still only accounts for 51,100. This shortfall of nearly 38,000 demonstrates just how much people want to live in and around Birmingham and the competitive nature of the market.

So how does this affect you as an investor looking to buy property in Birmingham? As you’d expect, the lower the supply, the higher the demand and the more prices rise. While undersupply is a challenge affecting the entire UK market, Birmingham is particularly competitive. This is just one of the reasons that the Royal Institute of Chartered Surveyors (RICS) believes average UK rents could rise by 15% as soon as 2023.

With Birmingham making huge improvements to infrastructure, transport links, commercial space and business growth, it’s no surprise that the population and the economy is growing so rapidly.

As the anchor of the West Midlands, Birmingham is one of the most well-connected cities in the UK – a fact that heavily contributes to its economic success. When compared to 2018 figures, Birmingham saw a number of increases in key economic metrics in 2019:

While future growth is expected to be linked to a concrete Brexit deal, it’s likely any performance will be below the norm – any deal which could be formed will likely not provide better trading conditions than what we have currently. That said, economic performance is expected to be much stronger in Birmingham when compared to the rest of the UK – GVA growth in the second city is expected to average 2.6% p.a compared with UK GDP forecasts which sit at 2.0% p.a during 2020.

Job growth follows a similar story – employment growth in the city is expected to average around 1.1% p.a over the next five years, well above the national average of 0.5% p.a.

This follows a trend of success that dates back to 1999. Birmingham has seen prices rise by 211% over the last 20 years – a value change of £140,000 – and 45% over the last decade according to Zoopla, some of the highest increases in the country.

That said, Birmingham remains one of the most affordable areas in the UK and continues to attract both buyers and renters because it offers better yields and a lower initial entry cost than the central London market.

Around 2009, many regional cores such as Birmingham had fully-fleshed out and even started moving forward on transformational redevelopment projects that made significant progress around 2016, coinciding with the Brexit vote. While these cities couldn’t match the astronomical rise of the capital in the early years, they came into their own post-2016 and Birmingham in particular has led the way for the UK.

London’s decline played a huge part in this and though the capital is expecting to see mild recovery in the next few years, Birmingham will continue to over-perform against a backdrop of redevelopment and progress.

In the last decade, developments in Birmingham have become increasingly mixed-use, providing progressive and vibrant working environments as well as smart living spaces. Numerous infrastructure improvements have helped create a powerful network across the entire West Midlands with Birmingham at its source, putting the second city firmly at the forefront of UK development.

The next steps for Birmingham are vital. The development pipeline is incredibly exciting but it’s important that the city continues to evolve, pushing new developments alongside large-scale regeneration. At the same time, Birmingham needs to utilise its unique position in the UK, capturing and driving the next generation of business.

Recent months have been quite eventful for Birmingham. Construction continues to push forward for the 2022 Commonwealth Games (including the £350 million Athletes’ Village) while developments such as Paradise, Arena Central and Smithfield are creating new landmarks in the city. Birmingham Smithfield is particularly exciting as it will broaden the city’s core and has the potential to turn Digbeth into a new residential and leisure hotspot within Birmingham.

In terms of infrastructure, HS2 has helped attract a wave of inward investment because of the potential it offers commuters, especially those who may work in London but want to live in Birmingham. The Midlands Metro expansion is doing the same on a local level, creating new travel links across the city and rejuvenating connections with existing lines. In practical terms this has impacted property prices, rental prices and demand, ensuring Birmingham remains at the forefront of the property market.

The headline stat for the Birmingham property price forecast for 2020 has to be the 15% increase that the city is expected to see. While growth has been above-average for Birmingham over the last three years, the sheer scale of the demand is ensuring that the city can maintain that momentum in 2020 and beyond – at which point it will be accelerated by the arrival of the Commonwealth Games in 2022.