After the highs and lows of 2021 and as we transition into the second half of 2022, we’re looking ahead in our 2023 Bracknell Property Price Predictions to see what the next 12 months could hold for this popular, up-and-coming Berkshire town.

Driven, largely, by the quest for more space for your money outside the Capital alongside the increasing cost of living, property in the wider South East, including Bracknell, continues to provide an attractive alternative.

With many buyers taking advantage of record low mortgage rates combined with a growing demand for more space in 2021, the UK property market boomed. This growing trend has continued into 2022, with the average UK house price now valued at £276,755.

With the Land Registry reporting a rise in property prices by nearly 11% year-on-year in February 2022, many have speculated that the market might settle down as the mismatch between supply and demand persists. Savills forecasts overall price rises of 3.5% this year and 3% in 2023, with property portal Zoopla also having similar projections of a 3% rise this year. Meanwhile, Halifax envisages a slower UK property market, with prices changing by 0% – 2%.

Bracknell’s rental market has also continued to strengthen, with a  2021 report by the ONS stating that Bracknell rents have risen 32% for some types of property since 2011 – with this showing no signs of slowing down with the rising demand in the current market.

On closer inspection of the South East, the outlook is even more positive, with the average UK house price now sitting at £380,528 following an annual increase of 12% since February 2021. Savills’ revised forecasts suggest that property prices in the region will rise by a further 13.1% by 2026.

Similarly, rental prices are at a 13-year high, having increased 8.3% by the final three months of 2021. With the economy now opened up again following the easing of Covid restrictions last summer, this combined with the shortage of new properties on the market demonstrates the potential rental income stream for investors.

The average property price in London was £510,102 in January 2022 – down 1.8% from December 2021, according to official data published by the HM Land Registry and the Office for National Statistics (ONS).

Regional data from the house price index revealed that the UK’s capital city saw the lowest annual price growth, an increase of 2.2%, and the 1.8% dip was the most significant monthly price fall. Despite these figures, London will continue to pull in purchasers looking for thrilling city centre living whilst Bracknell poses an attractive and affordable alternative for those wanting to be in close proximity to the city and all its amenities.

Overall price growth in the Bracknell property market continues to be higher than Greater London, highlighting the potential within the market. With most properties in the South East already much more affordable than London, these predictions demonstrate the strength that property for sale in Bracknell could have in 2023 as purchasers continue to look for property outside of major cities which offer more bang for their buck.

According to Zoopla, the average price of property in Bracknell in the last 12 months is £392,729, rising in conjunction with current market demand and an increase on pre-pandemic figures. The long-term performance over the last five years has been positive, with the current market following suit.

It should also be noted that the Bracknell property market remains a favourable, affordable alternative to its peers. Despite long-term growth, prices in Bracknell are almost less than a third of the average price of London property with potential to achieve almost double the yield, as well as having 2.21% higher yields than neighbouring Reading.

In Bracknell, property prices are expected to rise 13.1% by 2026 (Savills) and rental prices are at a 13-year high having reached 8.3% by the final three months of 2021 (Zoopla). While price growth continues to be higher in London and Reading, the Bracknell property market remains an affordable, high-yielding entry point into the South East. 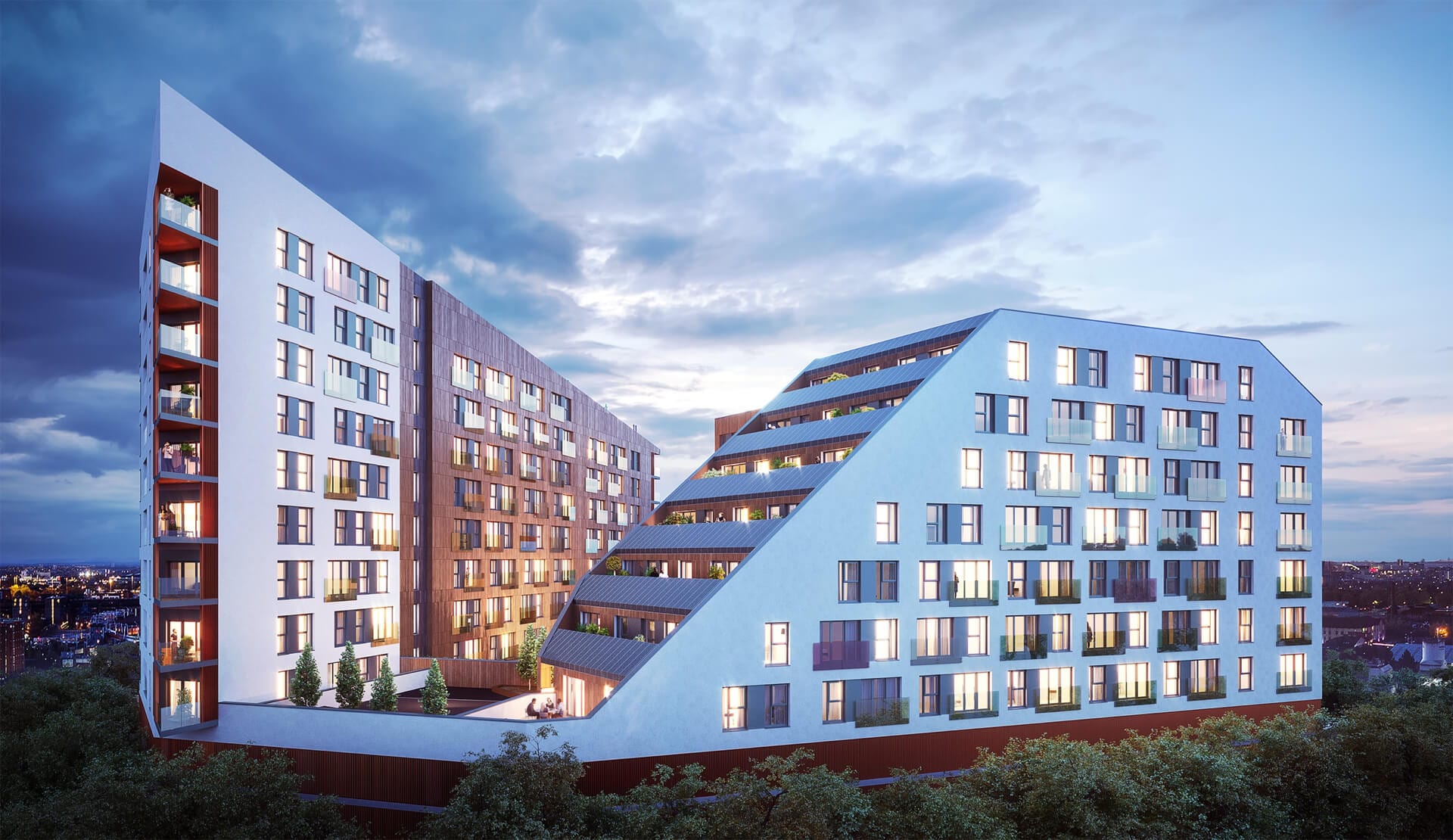 Want to add a new off-plan development to your portfolio? Introducing The Grand Exchange – a new residential development in Bracknell.

Completely unique to the local market, The Grand Exchange is designed with the modern resident in mind, filled with exclusive amenities including a gym, co-working space and resident’s lounge.

Bracknell is quickly becoming a major property investment hotspot, with industry experts predicting that it is on course to become one of the swiftest growing towns in the UK over the next few years.

Much like we have seen across the wider UK market, a storm of growing demand and constrained supply has been propelling property in Bracknell. With forecasts anticipating a population of nearly 130,000 by 2033, this demand for property is expected to continue indefinitely.

According to OnTheMarket, the current demand for apartments in Bracknell is already outweighing supply, meaning any increases in population will likely only exacerbate this further.

As with many other London commuter belt locations, a large proportion of this rising demand is coming from London leavers searching for more affordable rents in greener environments, with an emphasis on flexible working arrangements also driving this market. With Bracknell just 36 miles from the Capital, property investment will be a desirable option in this increasingly popular ‘outer commuter belt’.

Not only have changing resident and tenant demands been significant contributors to the performance of property in Bracknell, but the town’s ongoing regeneration is also fueling this demand. The Bracknell 2032 Vision plan is underway, with ambitious plans to rejuvenate the town with new amenities that meet the demands of the town’s new residents. From retail hubs, such as The Lexicon and Princess Square, to progressive work spaces, this will inevitably drive Bracknell property prices further.

With a sustained level of growth in the number of buyers looking to outer city commuter locations, the South East is likely to continue to be powerhouse of the UK economy.

This will likely coincide with the next phase of the Bracknell Vision project that is rejuvenating the town. With The Deck – a major scheme within the town – still on track to be completed in 2023, it will drive even more traffic to a town that has already seen £770 million invested into its local amenities and infrastructure.

According to data by Huq, a footfall analytics company, the town has experienced 70.4% growth in footfall since lockdown restrictions eased, placing Bracknell amongst the top three busiest towns in the UK. With contemporary retail hubs and The Lexicon, this provides insight into what is yet to come in Bracknell.

Despite the economic challenges of 2022, with the rising cost of living and the surge in inflation, UK unemployment has fallen to its lowest rate in nearly half a century in the first quarter of 2022, with the employment rate expected to rise by 73.8% in 2023.

Bracknell’s economy remained buoyant throughout the challenges, with a population of around 120,000, 80% of which are economically active. With one of the highest employment rates in the country currently sitting at 86% compared to the current UK average, Bracknell is a buoyant economy driven by a number of forward-thinking digital businesses. Ongoing significant investment from Bracknell’s LEP and Bracknell Forest, further demonstrates the town’s commitment to its future.

So, what does this mean in terms of the economy and Bracknell property prices? The Council’s initial investment into the town has had a domino effect across Bracknell, catalysing more schemes and driving more regeneration, as well as attracting more businesses and residents to the town, meaning Bracknell property prices are expected to continue to grow with increased demand from both homebuyers and tenants.

Future growth can be determined by a combination of factors, but regeneration schemes are a significant indicator of this. Bracknell has numerous developments on the horizon, which aim to meet the demands of its future population.

With the Bracknell 2032 Vision currently working towards building a prosperous future for Bracknell, the investment opportunities are only going to grow. Property investment in Bracknell is expected to become increasingly lucrative, with substantial growth expected across both the sales and rental markets.

While The Lexicon has provided immeasurable benefits to the town, future schemes as part of the wider plan look set to build on these successes. The Deck, planned to complete in 2023, will be a major part of the next phase.

A covered public space that features new shops, bars, restaurants and entertainment, linking Princess Square and The Lexicon together will be ‘a focal point of the town centre’.