The general consensus seems to be that working from home is here to stay. With thousands of businesses already adjusting to the idea of working remotely, many believe we’re witnessing the beginning of the end for the daily commute.

If this is indeed the case, it’s not hard to imagine that we’ll also soon have less city offices – as businesses realise they can manage a remote workforce without the need of a pricy head office in the capital.

So, with less importance seemingly being placed on proximity to London, what’s going to happen to commuter belt property prices?

How Will Commuter Belt Prices React?

There’s no doubt that a large majority of the commuter belt is underpinned by London’s property and job markets.

At a time when London property prices have reached unsustainable levels, followed by a relatively slow recovery compared to the wider market, much of the activity across locations such as Berkshire and Surrey is being driven by prime buyers leaving the capital.

Whether they’re looking for more space or value for money, buyers shifting from south-west London to the commuter belt can expect to find savings of £390 per square foot of space according to Savills.

This is a huge draw for many London residents that won’t necessarily need to be in the capital every day, five days a week.

“I expect people to say they will work only two or three days a week in London… that means they will be able to stomach longer commutes” believes Edward Lucas, part of Strutt & Parker’s Country department.

While this may hinder London’s outer markets, it’ll only benefit prices across the wider commuter belt – particularly in the towns creating a desirable standard of living through regeneration and amenities.

Already we’re seeing evidence of this in action – demand for South-East property is up by 74% compared to 2019 according to Rightmove.

With the average commuter belt property averaging between £400,000 and £500,000, the region also has the largest share of properties that can maximise savings under the Stamp Duty holiday scheme, cementing its place as a property hotspot until March 2021 at least. 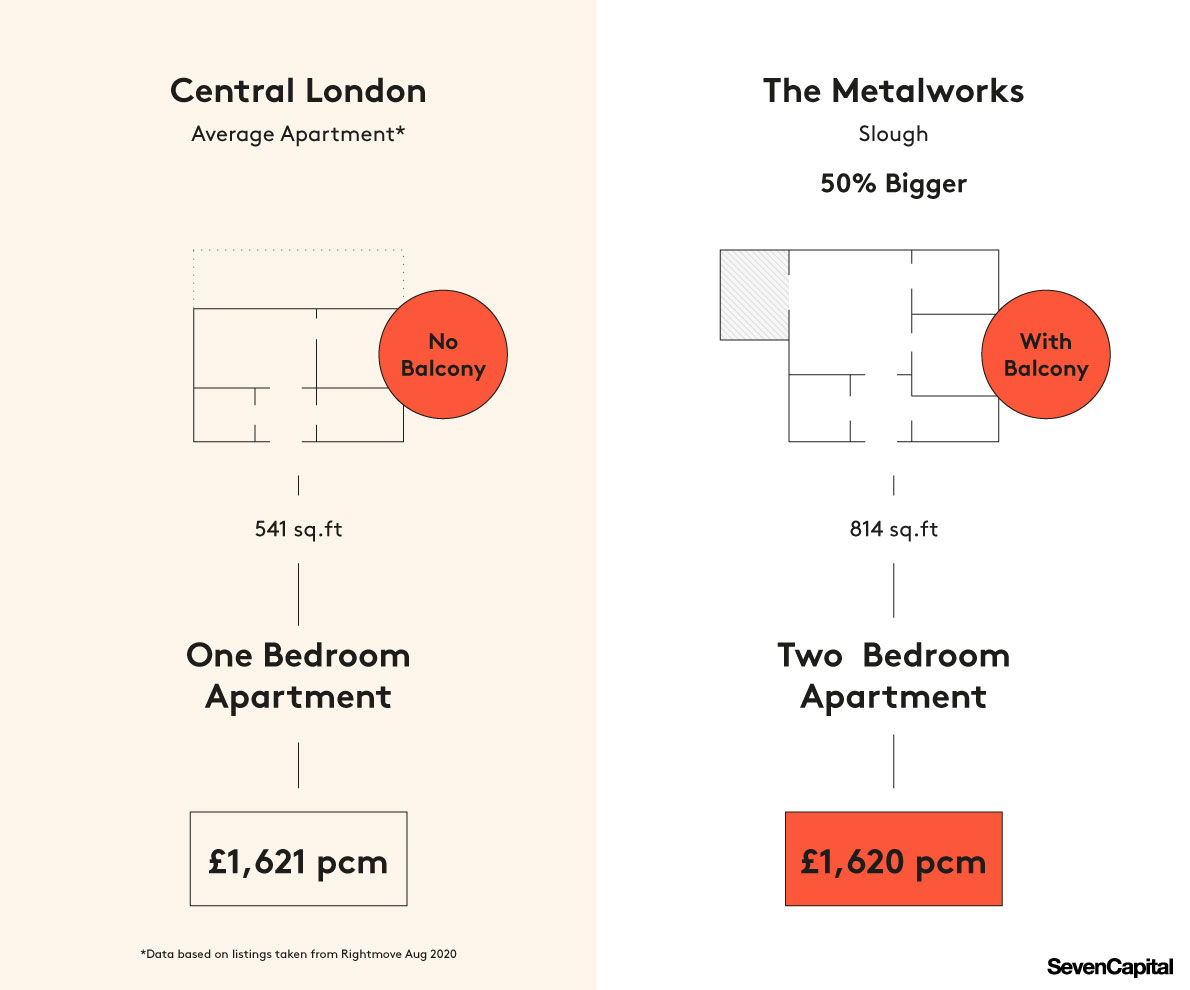 Comparing London and the Commuter Belt

The other factor to consider is how tenant priorities are changing. Increasingly, we’re seeing people look for more space as a result of their time in lockdown.

For many workers or families, there’s been little-to-no ‘me-time’ away from other members of the household, with the only possible solution being a larger space or extra room.

Similarly, it’s expected that people are now looking for developments with outdoor areas or green spaces nearby following lockdown – something that London property may struggle to offer compared to other markets.

This is why we’re seeing more upmarket developments in commuter regions such as Berkshire, which has undergone significant regeneration. When we compare the size and price of these new residences to upmarket London developments, it’s easy to see why residents in the capital would look further afield.

Looking at Fig. A, a 540 sq.ft one-bed apartment in a prime central London area such as Marble Arch would stand at around £1,620 pcm. That said, if we were to work from current tenant priorities and put apartment size ahead of location, the same amount would fund a two-bed apartment at a development such as The Metalworks in Slough, which also has a balcony and parking just 18 minutes away from London.

With both an outdoor space and the flexibility of a second room that could be used as an office, this is the type of development we’re seeing many tenants prioritise in the new market.

Obviously, as demand for these types of developments rises, you can expect prices to rise alongside them. Let’s not forget that while people may not be travelling into the capital for work, London still holds plenty of allure with those in the commuter belt looking to take advantage of the nightlife, leisure and retail amenities.

This is why The Metalworks is such a unique proposition for the South East. As a development it capitalises on new priorities while delivering the high-quality lifestyle and relative affordability that London renters are looking for.

This is Commuter Belt Investment

Discover spacious, high-quality living in an exclusive community just 18 minutes from London – all without the price tag.