House price growth across UK city’s remains at 3.9% and is rapidly approaching a three-year high, reinforcing Hometrack’s predictions of an increase in demand. This also seems to have been reflected in the latest data for mortgage approvals which are up 5% compared to a year earlier.

A number of cities across the UK seem to be contributing to this headline rate of growth, especially those in the South which were fairly stagnant during 2019.

That said, all English cities are now at their 2007, pre-recession prices. Nearly 12 years after the global financial crisis caused a huge contraction in the market – impacting housing demand and house prices – Newcastle has achieved the milestone and we’ve now reached ‘base’ market prices across the board.

Southern cities were the first to reach their 2007 levels, doing so in just seven years thanks to rising demand and employment growth.

Regional cities took a little longer, with most examples reaching their peaks in eight to ten years around 2015/2016. The Midlands and the North have since led the way for growth while the South has stagnated due to the speed of its price rises. 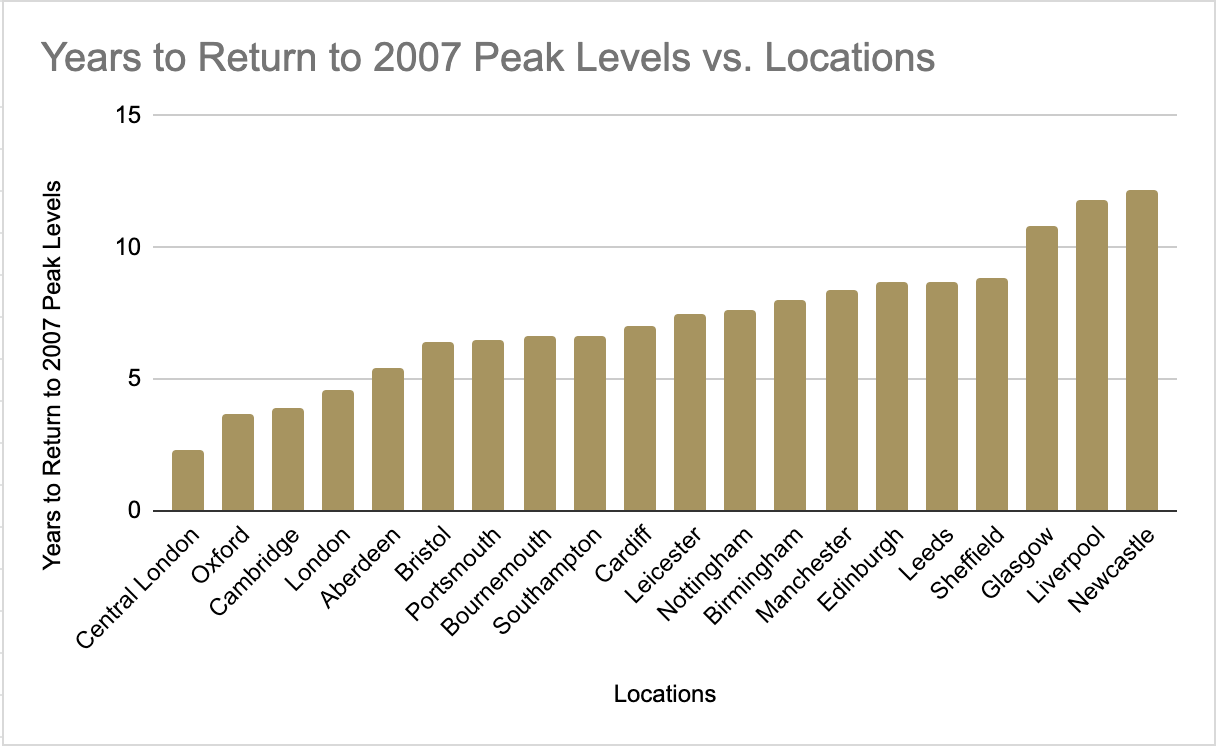 The total stock of homes available for purchase across the UK is just 2.6% higher than this time last year and across nine cities, stock is lower than a year ago to peaks of 6%. The supply of new homes coming to the market has followed the typical cycle but demand continues to rapidly outpace the levels of stock.

Hometrack expects this supply and demand imbalance to remain over the first half of 2020 and though this will drive positive price growth, affordability pressures will continue to limit price growth, especially across the South.

As demand continues to rise, increasing month-on-month so far in 2020, David Cox, chief executive of ARLA Propertymark, said: “This month’s results are a huge blow for tenants. With demand increasing by more than half, but rental supply falling, rent costs are unsurprisingly being pushed up.

“Our recent research found that tenants could miss out on nearly half a million properties as more landlords exit the traditional private rented sector and turn towards short-term lets which will only serve to worsen the problem for those seeking longer term rental accommodation.”

Make sure your next investment decision is an informed one. Get your free copy of the 2020 UK Property Guide today and discover how the market is set to pan out over the next year.

The number of landlords fell to 2.66 million at the end of last year – a seven-year low in the market.

It’s likely that changes to Buy-to-Let legislation, such as mortgage tax relief and the 3% stamp duty surcharge have driven many potential landlords out of the market. According to Hamptons International, those who have stayed tend to have bigger portfolios:

“Rents rose in every region across Great Britain in January to stand 3.6% higher than at the same time last year.

“The number of new homes purchased by landlords remains low, which is feeding through to fewer homes available to rent. This is particularly true in the South, where rents are rising the most.”

It’s expected that house price growth will continue to remain within current levels. The most likely challenge to the market will be sellers reading about the rising demand and trying to sell at unrealistic prices, which would then affect sales volumes.

While demand is increasing, affordability is still an issue in many markets and uncertainty is still clouding the fringes of the market when it comes to foreign investment. Many buyers will still be wary of pricing levels and this could affect sales rates, especially in the South where demand can have a huge impact on prices in a much shorter timespan.