In our December industry roundup, we examine the trends towards the end of last year and what’s set to continue into this year.

The latest Hometrack report was much more positive for the property industry, headlined by the announcement that house prices have grown by an annual average of around 4.4% over the last decade. As you’d expect, the election also featured heavily – the results of which have removed some uncertainty while market fundamentals will continue to set the tone of market activity in the new year.

Hometrack expect that UK property prices will rise by a further 3% in 2020, as regional cities continue to see above average growth. London growth is expected to be around 2%.

London continues to be a tale of two very distinct times – pre and post-2016. Prices in London have increased by 74% since 2009, although the majority of the gains came in the run up to 2016. ‘Unsustainable growth has stretched affordability levels which have been compounded by multiple tax changes and weaker sentiment’. It’s expected that affordability will limit price growth in London heading into 2020, although the capital has experienced some of its highest rises in 2019 – 1.7% year-on-year against 2018. 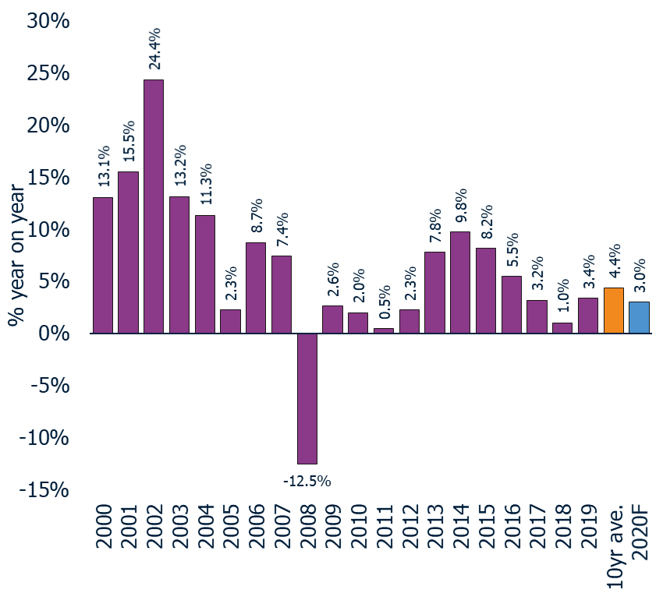 Price increases over the year have largely been down to fundamentals – lower mortgage rates and rising incomes. In the run up to 2007, prices were generally pushed higher by households increasing the amount of their income spent on housing. This change in attitude typically suggests that buyers are now more cautious, while new mortgage regulations are testing affordability.

In 2020, the UK market will continue to be dictated by these fundamentals – primarily housing affordability. Despite a change in government and a Brexit resoluti on helping to lower uncertainty, neither of these will change the fundamental market cycle. Hometrack expect a return of demand in 2020 Q1 across all cities and affordability pressures will remain a constraint to demand and the scale of growth.

Rightmove predict that property prices should rise by 2% across the UK in 2020 now that the change in government has been officially confirmed. According to Miles Shipside, Rightmove director and housing market analyst, “The greater certainty afforded by a majority government gives an opportunity for a more active spring moving season, with some release of several years of pent-up demand.

“Given the Brexit track record to date, further political twists and turns should not be ruled out, though with a large majority there is a higher possibility of an end to the series of Brexit deadlines and the prospect of an orderly resolution.

“While this is over twice the current annual rate of 0.8%, it’s still a relatively marginal increase as it’s a price-sensitive market.”

The outlook for the UK market in 2020 is generally more positive than 2019, bolstered by a clear majority result in the election and progress towards a concrete Brexit decision. Price forecasts are typically favourable for the majority of the country and while housing availability continues to be a challenge, the UK remains a solid choice for investors that want affordability and exciting potential returns in 2020.

Want deeper insights into the state of the UK property market heading into 2020? Download your free copy of the UK Property Guide today.

Get Your Free Guide Today