In our November industry roundup, we examine the trends that are transforming the property sector and the residential market heading into December and 2020.

This month’s Hometrack report represented a more positive sentiment toward the UK market. UK house price inflation is on the rise as prices across the South of England – traditionally a flat market over the last few years – have started to ‘firm-up’. Similarly, regional cities continue to overperform against the capital thanks to favourable market conditions. 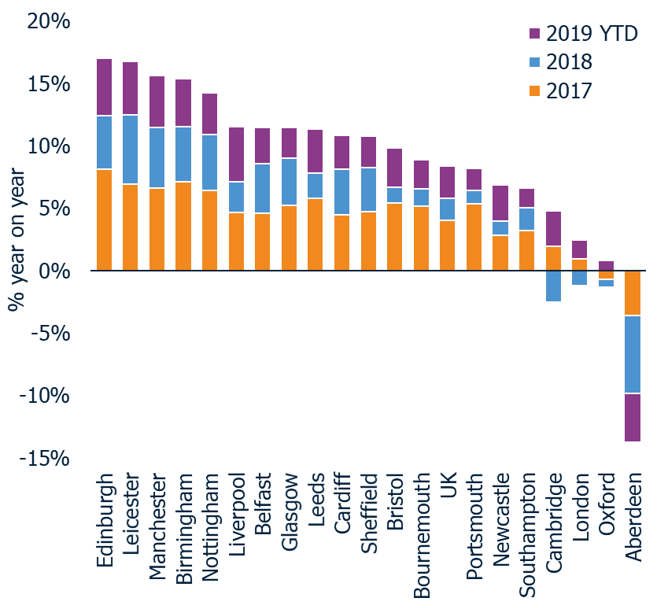 As we head into the final month of the year, the main story is the resurgence of London. After an extended period of decline, the capital is finally starting to see the light at the end of the tunnel. While large regional cities are continuing to experience above-average price growth on the back of incredible demand and low mortgage rates, London is experiencing its highest rate of growth for two years – with price rises of 1% during 2019.

Initially, this seems to signify the start of prices ‘firming up’ across the South of England – welcome news for a region that has seen year-on-year price falls since 2018 and a drop between 10% to 25% in sales volumes during the same period.

With nearly 256,000 Energy Performance Certificates for new homes granted in the year to Q3 2019, there’s indicators that the housing supply has continued to grow as we head into 2020. Despite these rises, undersupply remains a real issue in major cities up and down the country. Regional variation in the volume of new house-building remains and a substantial gap remains in the South, especially in London where only 55% of the standard method housing need was delivered.

The Internet of Things

The second home market has changed significantly over the last 10 years. While second homes were generally used for personal use before, today’s market is more geared to financial returns.

In the Savills research, 60% of respondents had a second home in the 90’s for personal use. In 2019, this figure is now under 40% with 49% instead using a second home as a rental property.

UK house prices are expected to rise by around 15% over the next five years according to the Savills research team. With differences across each region, London is predicted to be the strongest-performing over the next four years, reversing the trend that we’ve seen since the Brexit vote in 2016.

Nationally, political uncertainty is expected to keep the market relatively quiet but Savills believe prices will rise in line with incomes thereafter. Average rents are expected to rise by 18.8% in London and 13% in the UK, measured against income growth of 15%.

“Generally, the outlook for the UK property market remains the same throughout 2019 –   heavily reliant on the political landscape. Brexit will continue to ensure uncertainty, which has also been bolstered by the announcement of a General Election.

“Fortunately, a clear winner in the election will hopefully result in a clear roadmap for both Brexit and the housing market, thus restoring faith for buyers. While price forecasts are typically favourable for most of the country, price growth throughout the South East is particularly good for investors that want affordability and accessibility around London.”

Want deeper insights into the state of the UK property market heading into 2020? Download your free copy of the UK Property Guide today.

Get Your Free Guide Today