With a raft of changes during 2018 including changes to SDLT and proposed tax changes for overseas investors, as well as the UK’s impending exit from the EU, it’s vital for investors to stay ahead of the market to ensure a successful investment.

For investors that are looking for UK Property Investments and something outside of the traditional London investment, the UK market includes a number of emerging markets that have the potential to offer strong rental yields and capital growth. But where are the best places to invest in UK property in 2019? We’ve done the research and these are the UK’s best cities and towns for property investment in 2019.

Birmingham tops the list of our best UK cities to invest in 2019, buoyed by incredible inwards investment, huge infrastructural developments and a predicted population growth of 13.5% taking the city’s population to 1.3 million by 2039. With the youngest population in Europe, Birmingham’s five universities have helped develop a talented graduate pool of young professionals, ready to take advantage of the global businesses setting up headquarters.

The second city has the largest business, professional and financial services hub outside of London, attracting huge corporations such as HSBC, Deutsche Bank and PwC, making the city a truly commercial hotspot. This has only supported growing demand for living in the city, with contemporary apartments in areas such as the Jewellery Quarter, Harborne and the city centre providing excellent rental yields, between 5% and 10% on average.

2018 has been a big year for development in the second city, with cranes littering the skyline. From the generational development of High-Speed Rail 2 bringing London closer than ever, Birmingham is also home to the planned £700 million Paradise development, £1.5 billion Birmingham Smithfield regeneration and Arena Central, providing new residential, commercial and leisure space. Add a winning bid to be the testbed for the 5G mobile network alongside a future global event with the 2022 Commonwealth Games and you have a city experiencing incredible demand.

As the second fastest growing UK city over 2018 and with a forecast growth of 14% over the next three years, Birmingham is set to remain an investment hotspot in 2019.

The heart of the Northern Powerhouse continues to impress, supported by an incredibly strong rental market and student population. On track to experience a 14% population growth over the next 20 years and one of the UK hotspots for foreign direct investment, Manchester is a top performer in the UK for growth.

Manchester has the highest graduate retention rate outside of London having hit 70% this year, harnessing the influx of young people to drive supply and demand for more rental properties, which make up a large chunk of the city’s stock. Enviable employment options are available within the city, with a number of educational facilities setting up shop in the area including Salford’s MediaCityUK and the Amazon Academy. Voted the ‘Best UK City to Live’ in 2016, Manchester has also embraced the buy-to-let market, increasing property prices by 27% over the last 10 years.

With significant investment bolstering its credentials, Manchester remains a consistent performer alongside Birmingham and Liverpool in the UK’s top areas for rental growth.

The fastest growing city towards the end of 2018, Liverpool is recognised for its popularity with students, large-scale investment and regeneration of cultural touchpoints. As one of the most popular destinations in the UK, it’s no surprise that the former European Capital of Culture is one of the strongest buy-to-let investment hotspots on the UK property market going into 2019.

Liverpool has the fastest-growing economy in the UK, bolstered by flagship developments such as the £5 billion Liverpool Waters scheme and the Regenerating Liverpool masterplan, a £14 billion scheme which aims to improve city centre connectivity and regenerate large sections of the city with projects such as Paddington Village and the Lime Street Gateway.

Nestled at the heart of the Thames Valley, also known as the ‘UK’s Silicon Valley’, Bracknell is a sought-after postcode by global technology firms including HP, Dell, Honda, Hitachi and Waitrose.

With incredible employment opportunities and connectivity within the South East and London, unemployment in Bracknell currently sits at 2.5% and 86% of the total population is in active employment, 50% of which are working in Managerial or Directorial roles. This has resulted in incredible demand – currently home to 120,000, the population is estimated to rise by 21,000 over the next 20 years and will be a huge boost for a town on the rise.

While Bracknell was originally a post-war new town, it has undergone a number of dramatic transformations to become a vital hub for the tech sector, attracting the next wave of young and ambitious professionals that are seeking progressive digital business, forward-thinking employment opportunities and affordability.

With £770 million committed to enhancing key transport, infrastructure, healthcare and educational programs while delivering new, smart residential, commercial and retail space, the most recent regeneration project has laid out a vision for Bracknell until 2032. This ‘Bracknell vision’ includes The Lexicon, a vibrant retail and leisure destination that epitomises the blend of heritage and contemporary character that is defining Bracknell.

One of the success stories of 2018 and set to increase in 2019, Edinburgh has seen incredible growth over the last 12 months that doesn’t seem set to stop. Demand has continued to increase, outperforming London and UK regional cities. During April 2018, property prices in Edinburgh were 12% up on the previous year, one of the highest increases of the year.

Thanks to the incredible connectivity Edinburgh has with the rest of Europe and beyond, the Scottish capital is attracting global companies including Travelodge and Amazon, who all have investments in the city that will be expanded during 2019 and beyond.

The city also benefits from a world-leading research sector in knowledge-based fields, helping develop a thriving student population based around four universities. Edinburgh is predicted to have 68% of its total population of working age by 2021, maintaining an economy that represents one of the fastest growing in the UK.

Its central location in the UK offers immediate access to 22 million consumers and mainland Europe within 4 hours, while strong cultural links with Asia drives business growth and helps develop a diverse, multi-lingual workforce.

With property price increases of over 250% since 2000, Leicester is continuing to rise as a major investment hotspot. The third fastest growing location in the UK towards the end of the year, Leicester has benefitted from people leaving London for emerging regional markets. With a prime location and easy access across the UK, Leicester represents a fantastic investment opportunity. 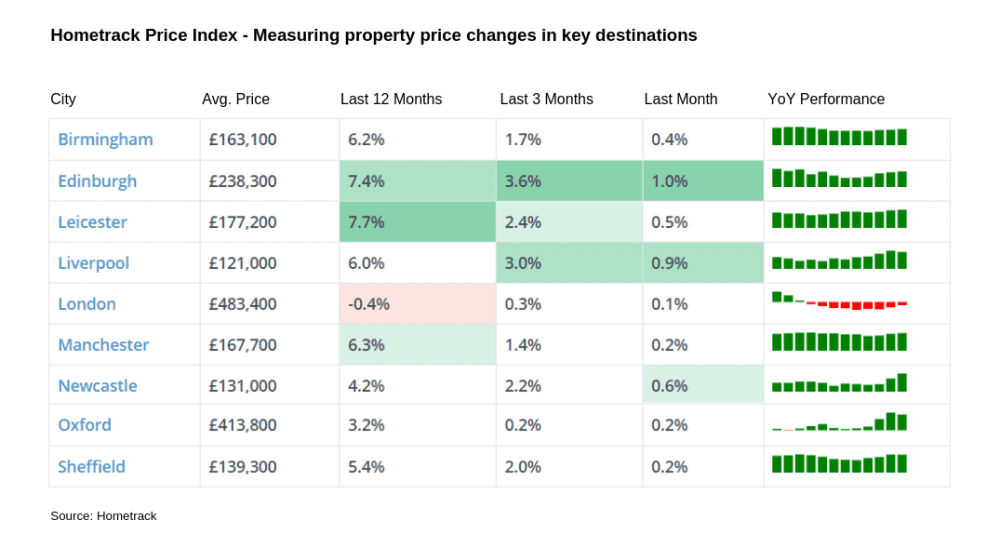 With Crossrail set to complete in 2019, next year could be the year that Slough skyrockets in popularity. One of the key destinations along the commuter belt and a major commercial hub in the South East, prices are forecast to rise 35% by 2020 thanks to increased investment and an economy worth £9 billion.

Combining huge infrastructural developments with a large regeneration scheme has meant Slough is now a commercial powerhouse with the lifestyle amenities to match. With the largest trading estate under single ownership in Europe featuring more than 4,600 businesses and the Slough Urban Renewal scheme pushing new residential, commercial and cultural spaces, Slough is continuing to benefit from the ‘London Exodus’, presenting itself as the ideal commuter destination.

Demand remains high from London buyers, with 46% of the homes in Slough let to people moving from the capital, demonstrating the appetite for more affordable, accessible living.

This commercial growth in Slough will also be supported by the Heathrow Expansion, a third runway which is set to provide a further 114,000 jobs for the region by 2030. With a large commuter base travelling to and from Heathrow for work, Slough will directly benefit from these improvements to the airport.

With a rapidly growing population (112% between 2002 and 2015), the rising popularity of city centre living means Newcastle is a location to watch in 2019. Newcastle’s attraction to young professionals means demand for the city is quickly increasing, bolstered by a strong student body and innovative developments.

Identified by experts as one of the most affordable regions for property, Newcastle is ideal as for BTL investments, favouring long-term growth as the city continues to grow. Commercially, Newcastle has attracted huge companies such as British Airways, HP, Nestle, Siemens and Ubisoft, covering a wide range of industries and developing a strong tech sector.

Experiencing some of the highest staff and graduate retention rates in the UK, Newcastle offers enviable employment opportunities that continue to grow, supported by a £12.5 million investment in the digital infrastructure that has yielded one of the fastest broadband speeds in the UK and free city-centre WiFi.

While property prices have increased at a slower rate than its northern counterparts, Newcastle has still shown positive growth over the last 5 years, increasing by 23%. 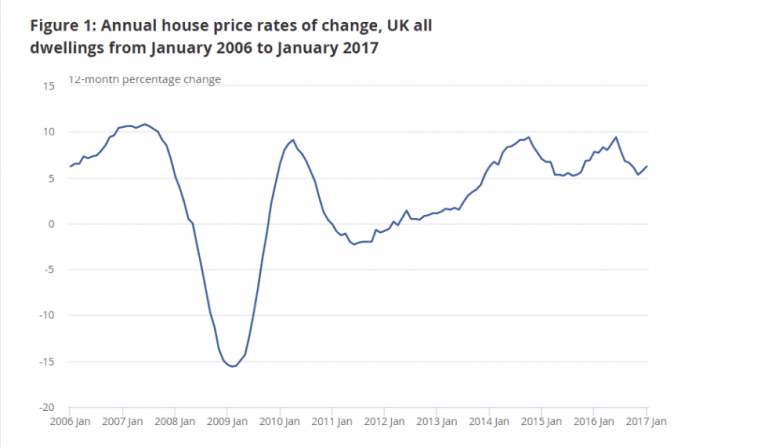 Updated: View The Best Places to Invest in UK Property 2020