When identifying an investment location, new avenues of demand, such as a rising population, is a clear signpost of future potential. If you can establish either population growth or an increase in workers – particularly in commuter belt locations – it’s likely you’ll see price growth follow suit. This is why we’re examining the Bracknell population forecast.

Our research shows that Bracknell is a top emerging location for investment, largely driven by the influx of both workers and renters that are entering the market. There’s a number of different things that are causing this rise in population, all of which should be noted by investors.

Rise of the ‘Outer’ Commuter Belt?

One of the latest trends to come out of three national lockdowns has been the gradual expansion of the London Commuter Belt. As working trends have changed, we’ve seen both buyers and renters relocate from Central London to more affordable, spacious areas that still offer access to the capital.

While the original definition of the London Commuter Belt meant areas near London such as Slough were established as commuter towns, over time, the distance that commuters have been willing to travel has expanded. Now, in 2021, changing tenant priorities means London commuters are now more likely to travel further for work.

Research has found that the average distance moved by a Londoner buying or renting outside of the capital hit 40 miles for the first time in more than a decade, putting this new town firmly in the new catchment area and further supporting the Bracknell population forecast.

Offering a high quality of life for residents, as well as large-scale redevelopment of local amenities, Bracknell is expected to see incredible short-term increases in demand. For investors, this should be a clear signpost of Bracknell’s emerging potential as an investment destination. As the population rises, and the amenities are put in place to meet their needs, investment properties will be able to command higher rents across the board.

With Crossrail in the mix, these new residents will also have quicker, more efficient transport links with the capital. Crossrail is a fantastic example of an amenity that could revolutionise demand and ensure better connectivity, a clear benefit for a London Commuter Belt destination and an amenity that Nationwide predicts could demand a 9.4% premium in terms of property prices.

Bracknell’s status as a cornerstone of the UK technology industry is well recognised and plays a huge part in the commuter town’s rising demand, while also acting as a catalyst for the above-average Bracknell population forecast.

Bracknell Forest is home to a population of around 120,000, 70,000 of which are economically active. With one of the highest employment rates in the country currently sitting at 86% compared to the 78% UK average, Bracknell is a buoyant economy driven by a number of forward-thinking digital businesses.

As of last year, Bracknell Forest had just over 5,400 businesses across the landscape, with the majority located in the professional, scientific and technical sectors. A large majority of these businesses are identified as ‘micro’, made up of zero to nine employees, a demographic that has seen the biggest increases over the last seven years and now makes up 86% of the total sector.

On the opposite end of the scale are businesses with over 250 employees, categorised as ‘large companies’. Nearly 35 of these are active in the Bracknell area and include brands such as Dell and 3M, with the latter estimated to have around 700 employees based in their Berkshire HQ.

In terms of productivity and opportunity, Bracknell is one of the most desirable locations for these sectors and has incredible draw with ambitious young professionals. As people continue to leave London for nearby hotspots such as Slough, Bracknell and Reading, the career opportunities available are a huge catalyst for the increasing population. 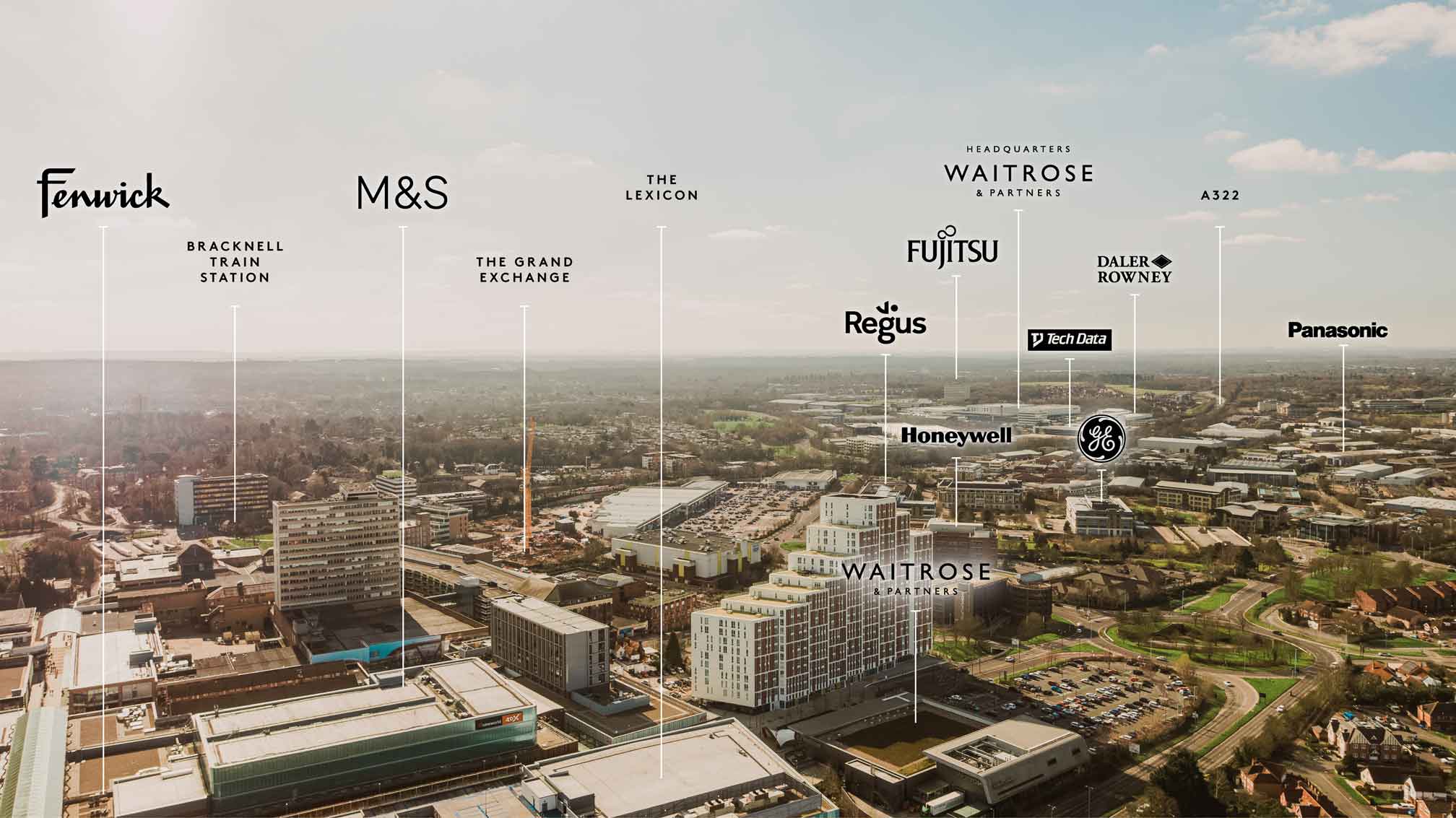 Building the Bracknell of the Future

The Bracknell population forecast is also being heavily affected by the regeneration throughout the town centre. Creating a vibrant, exciting destination for the wider Thames Valley as a whole, shopping centre ‘The Lexicon’ has contributed to an annual footfall of nearly 16 million for Bracknell. According to FSP Retail Business Consultants, Bracknell Town Centre is now the retail destination of choice for 66% of residents, up from the original figure of 17% taken weeks after The Lexicon opened.

This alone demonstrates the huge demand driven by The Lexicon, which created around 3,500 jobs within the retail sector for Bracknell.

In the Berkshire Thames Valley LEP Delivery Plan, it was estimated that improvements to infrastructure would facilitate 9,050 new jobs by March 2021, while 3,520 were actually created during 2019. Within the ‘business environment’, 1,096 jobs will be created or safeguarded by the LEP Delivery Plan over the next two years.

Going forward, it’s vital that Bracknell continues to invest in the infrastructure to meet rising demand. By creating new opportunities and high-quality commercial space, Bracknell is ensuring that it can accommodate rising employment levels across the market.

How Does This Impact Investors Going Forward?

So how will this growing population and rising demand impact investors? For starters, having an undersupply of property for sale in Bracknell will likely directly correlate with rising prices. As competition grows in the market, searches for flats to rent in Bracknell from young professionals, commuters and Bracknell’s natural population growth will increase. This competition will underpin rental price growth particularly, especially as nearby amenities make the surrounding area more desirable.

The knock-on effect of this is that property to rent in Bracknell will be at a premium, especially if they can deliver the spacious, premium standard of living that modern tenants are looking for.

This means developments such as The Grand Exchange – which represents a unique addition to the town and one of the few new builds in Bracknell – will experience incredible tenant demand.

The Grand Exchange also features many of the contemporary design features that modern tenants are looking for. From the exclusive co-working space to the private outdoor areas available, it checks a number of boxes from recent tenant surveys that suggest modern residents want facilities to help with potential lockdown living and changing attitudes to working from home. 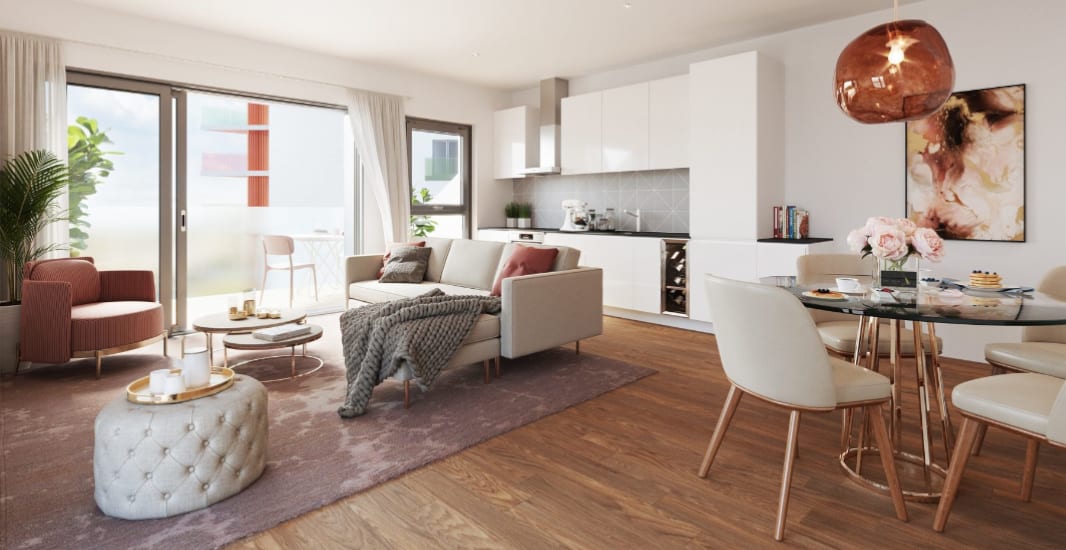 With Bracknell forecasting 17.5% growth over the next four years, there’s no doubt that both The Grand Exchange and the wider South East are some of the most promising locations for investment going forward. As an Off-Plan investment opportunity, there’s never been a better time to get in on the ground floor before this growth comes into play.

Comprising spacious and light open-plan apartments, The Grand Exchange is built to a premium standard that can’t be found anywhere else in the local market. Featuring contemporary design, high-specification appliances and furnished to an exceptional standard, The Grand Exchange is a flagship development for an emerging market filled with potential.