Home Property News What Does a Post-Election Property Market Look Like?
Back to Articles

We hear from Damien Siviter, Group Managing Director at SevenCapital, on what the results of the 2019 General Election could mean for the wider market:

“The clear Conservative victory in yesterday’s election demonstrates the UK’s desire to move the UK forward. Overnight, as the predicted Conservative majority fast became reality, the pound surged against the dollar to a 19-month high, offering a further boost to the prospects of a Boris Britain.

Should Boris stay true to his plans for Brexit, the 3.5 years of being stuck in a limbo could finally have an outcome, which is a resounding wish amongst both business and the general public.

However, despite the uncertainty of the past few years, the UK has proven its ability to maintain its position as a top Global economic and financial centre and attractive, investable region. With Boris now able to move forward with his plans for Brexit, businesses should hopefully be able to begin to see some clarity over the next few years on how the UK will exit the EU, allowing those markets that have faltered to start to move again.

For the property market, this is good news. The uncertainty over the past few years as we remained in this limbo of ‘are we, aren’t we going to leave’ has had a knock-on effect, hindering some projects which in a normal situation would have gone ahead with little issue and causing hesitation from investors.

This strong victory from the Conservatives should restore some of the confidence within the market across the UK and amongst investors from overseas.

For the housing market, today’s election results should result in a positive boost to both activity and to prices. As with any market across the UK, the property market reacts to levels of certainty. With one of the strongest majority results in years, this activity looks likely to be very positive.”

In the run-up to the General Election, the UK property market is waiting with bated breath to find out who will be leading the country come December 13th and, consequently, which way house prices may swing as a result.

How much does a British election affect house prices?

Historical house price data suggests that during the months immediately either side of an election, price growth is modest at best, with growth following this appearing to be down to a number of factors. These factors include; how long a Prime Minister has been in power, their stance on the housing market, the state of the housing supply and major political events near to the election.

To get a better understanding of how property prices are affected, it’s best to look at pre-election, post-election and the months that follow on.

Past performance shows us that prices tend to increase in the month leading up to an election, rising slightly prior to the results before increasing further after the election.

The 1.08% property price growth in the month prior to Cameron’s second successful election in May 2015 – when house prices rose from £193,225 in April to £195,313 in May – was the highest month-on-month (MOM) pre-election growth rate since Harold Wilson’s second election in October 1974, which saw house prices grew on average by 2.64%.

Growth one month after an election shows a similar story. After Theresa May’s election in June 2017, house prices grew 1.3% on average – the highest one-month growth rate since the 3.6% achieved after Tony Blair’s second successful election in June 2001.

If we look at the growth rates over a longer period, we see prices typically experience steady growth before they accelerate quickly after six months.

Following the last two elections, we’ve witnessed the highest level of house price growth over six months since Blair was first elected in 1997. House prices in May 2015 grew by 4.56% after Cameron’s second successful election and 3.62% following May’s election in June 2017. These increases are much higher when compared to the Coalition government forming in May 2010 (1.07% over six months) and Blair’s second and third elections in 2001 and 2005, (1.52% and 2.45% over six months respectively). 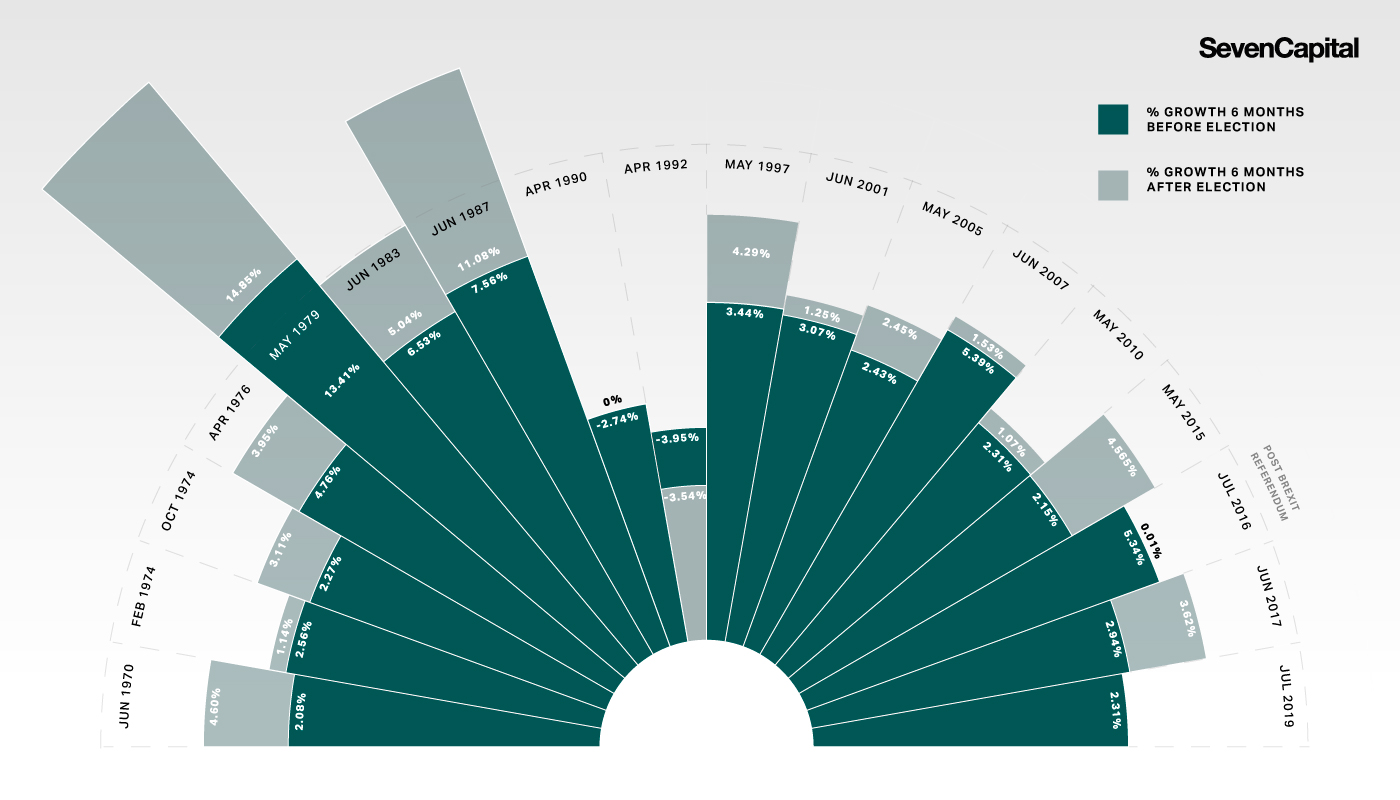 How will the election affect UK house prices?

The housing market fundamentally reacts depending on the level of certainty an event brings. When there has been an incoming PM following a resignation, growth has stagnated in the following months – just 0.01% following May’s takeover from Cameron and post-referendum, and 0% when John Major took over from Thatcher in April 1990.

When a Prime Minister is officially elected, we typically see a boost in house prices. If the next Prime Minister can bring an end to Brexit and ensure ‘certainty’ in regards to the UK economy, it would be likely we’d see the pattern of price growth repeat. Past performance clearly demonstrates that property prices climb following modest growth after an election.

History also seems to be repeating itself in terms of pre-election increases as well. According to Halifax, house prices rose at their fastest rate in seven months during November – an increase of around 2.1% that marks a significant jump over the 0.9% increase recorded in October.

With a new average property price of £234,625, Halifax believe that despite the uncertainty of a General Election, buyers are being spurred on by affordability, mortgage availability and the limited supply of properties in key regional areas.

Residential undersupply is a key theme heading into 2020 and as mentioned above, it’ll be important for each political leader to consider how they may deal with the challenges facing the housing market.

According to Andy Foote, director at SevenCapital: “What the figures over the past two elections have shown us is that, despite much speculation around whether the UK’s house prices are stagnating, the reality has been far more positive.

“Should investors and home buyers be worried about the outcome of the election? If history is to be repeated, they should expect modest growth initially, but once the new PM is in place and their plans for the UK, the economy and, importantly Brexit are laid out, there’s no reason at the moment to not expect a positive rise over the following six to 12 months.”

Whichever way the vote ends, it’ll be vital for investors to keep a sharp eye on the entire UK market. While every party will no doubt have policies designed to mitigate undersupply and history tells us that growth is to be expected, investments are always open to fluctuations.

That said, right now the UK property market represents an ideal opportunity – there’s growth forecasted in affordable areas with growing demand and low interest rates, all of which are incredibly appealing for those that are thinking about getting on the property investment ladder.