According to research from the end of 2019, the early outlook for 2020 is positive. Hometrack believe that any growth in 2020 will be driven by affordability factors, with house prices expected to increase by +3% over the year and the UK’s most affordable cities seeing above average growth. Once again, London is expected to deliver below-average growth although the signs are there for further recovery.

While price falls towards the end of 2018 had an impact on annual growth rates, the average UK property house price has increased at an annual average rate of 4.4% per year over the last decade.

As figure 1 shows, there is a major difference between current and 10-year growth rates across major cities in the UK. Cities in the south of England have witnessed much better growth over the last decade but struggled in recent months. On the other hand, cities that had a slow start to the decade such as Glasgow and Belfast have seen much better growth over the last year or so. 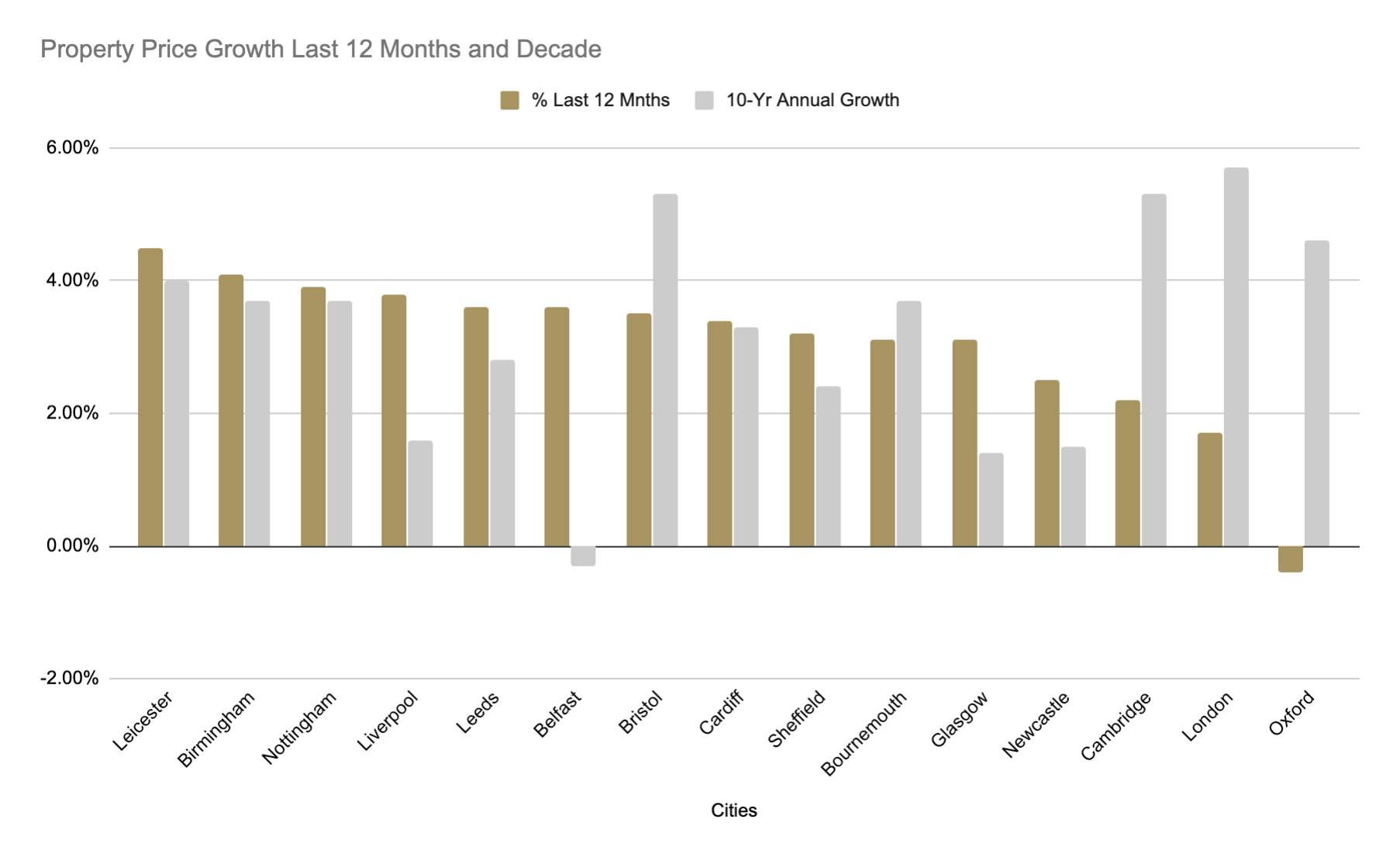 Rental supply steadily increased over the years up to 2016 before dropping by 4% over the last three years. At the same time, rental demand has increased by 8% over the last year, meaning rental values have also increased.

Rental growth accelerated over 2019 by 2.6%, although it is still running below average earning growth which sat at 3.8% according to data from the Office for National Statistics (ONS), excellent news for renters and property owners. 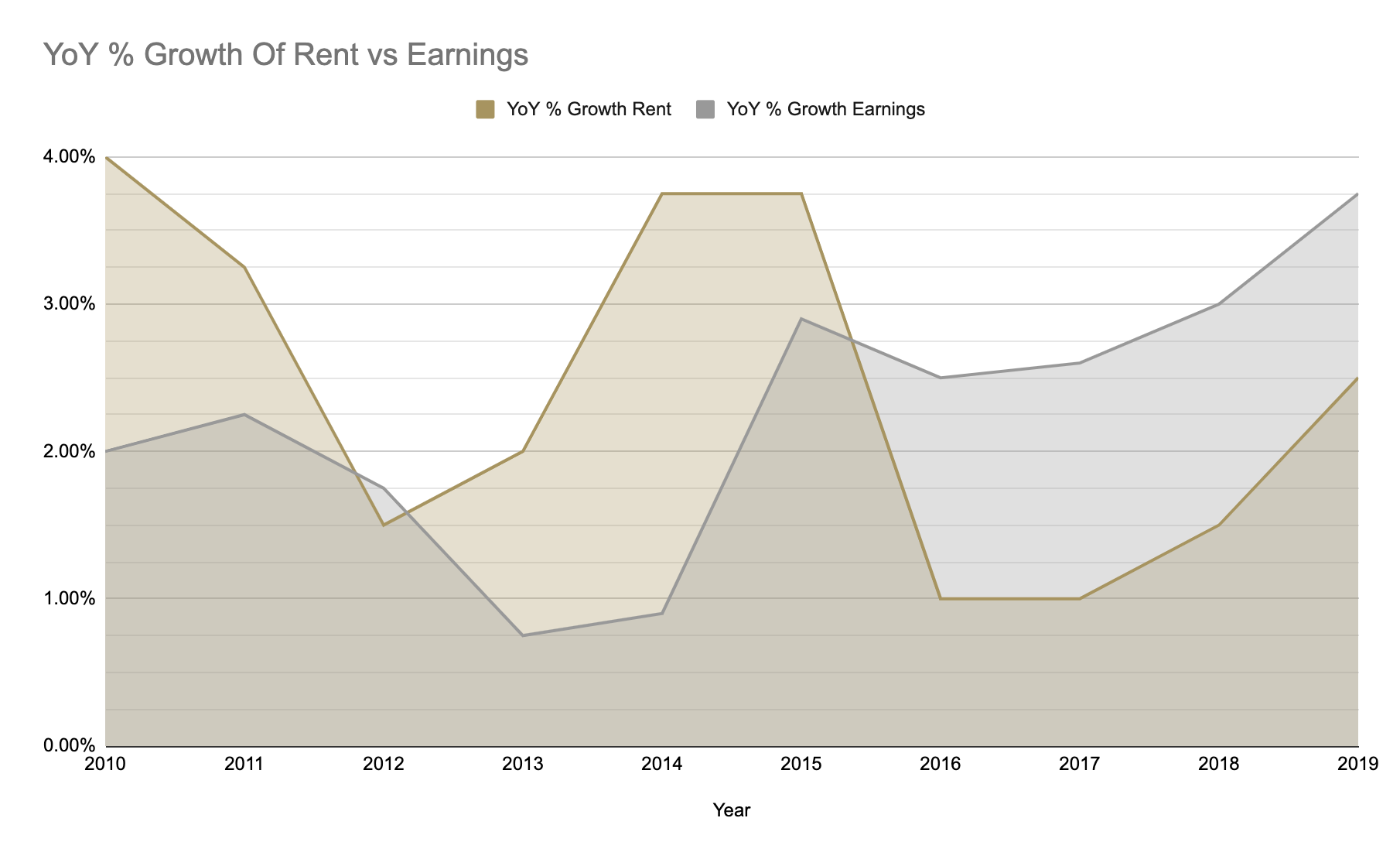 While a large proportion of the global residential markets saw slowdown during 2019, the outlook for 2020 is much more positive. During last year, capital value growth across the Savills World Cities Prime Residential Index averaged 0.1%. In 2020 they’re forecasting 1.8% growth on average, a huge improvement but still well below the top increases last decade of 9.3% in 2013.

Savills World Research believes that offices in core cities around the world will be a major investor focus in 2020 but with undersupply still a challenge, many may be forced to look for alternatives. Finding the right stock is vital but this will be a challenge in markets where there’s vastly different levels of supply.

Real estate will remain highly attractive on the world-stage compared to equities and bonds – supported by low interest rates. It will be vital for investors to take trade conditions, government agendas and climate risk into account as they will all impact overall performance.

Residential landlords will also be able to take advantage of the increased demand around these commercial plots. New office space attracts a professional workforce that will be looking for accommodation – ideal for a Buy-to-Let investor.

After the result of the 2019 General Election erasing a degree of uncertainty, London’s prime luxury market has seen a bounce back according to Savills. 109 sales worth over £5 million were recorded in the last quarter of 2019, double the amount of the quarter before.

In terms of value, £1.3 billion worth of homes were sold in Q4 2019 – almost 133% more than that recorded in Q3 2019 and up 11.3% against the same period in 2018. It’s expected that this huge boost has been caused by a release of pent-up demand driven by foreign investors waiting for a solid answer on the new government and Brexit.

Overall, the new year has started well for the UK property market with both property prices and the Sterling seeing positive growth. As we head towards the end of January and closer to a potential concrete date for Brexit, the future looks bright for UK property in 2020.

For more information on the 2020 UK market, from specific locales to general insights, take a look at our ‘Stay Ahead of the Market series’ – educational guides designed to provide the latest statistics, news and resources to inform your next investment decision.